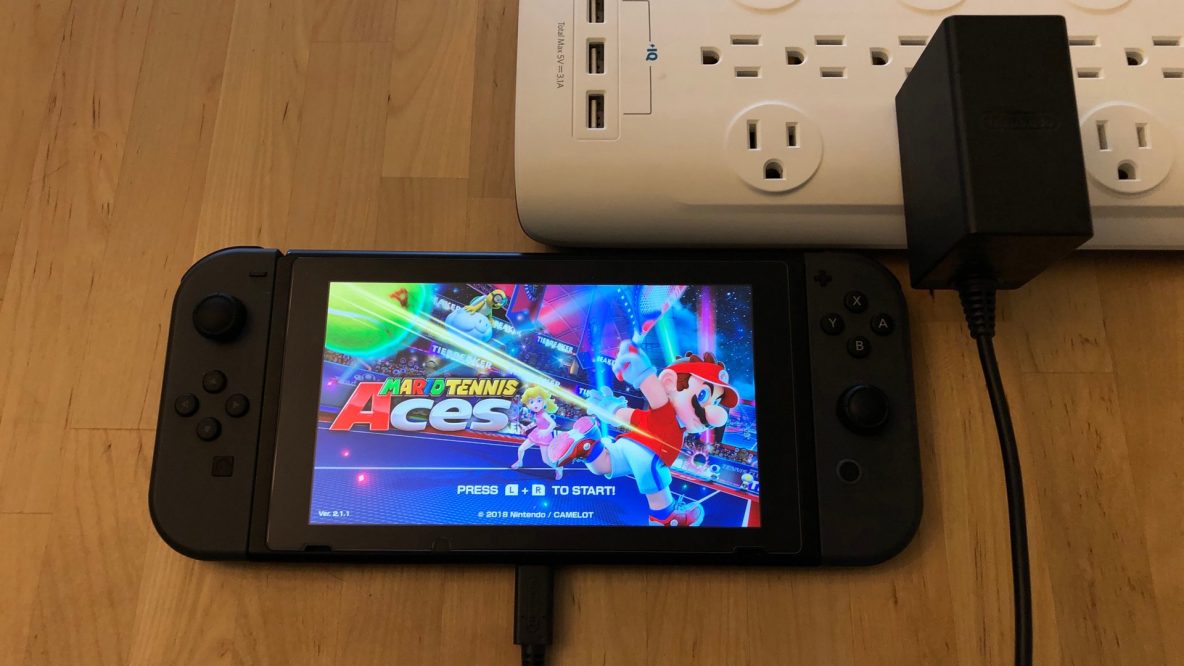 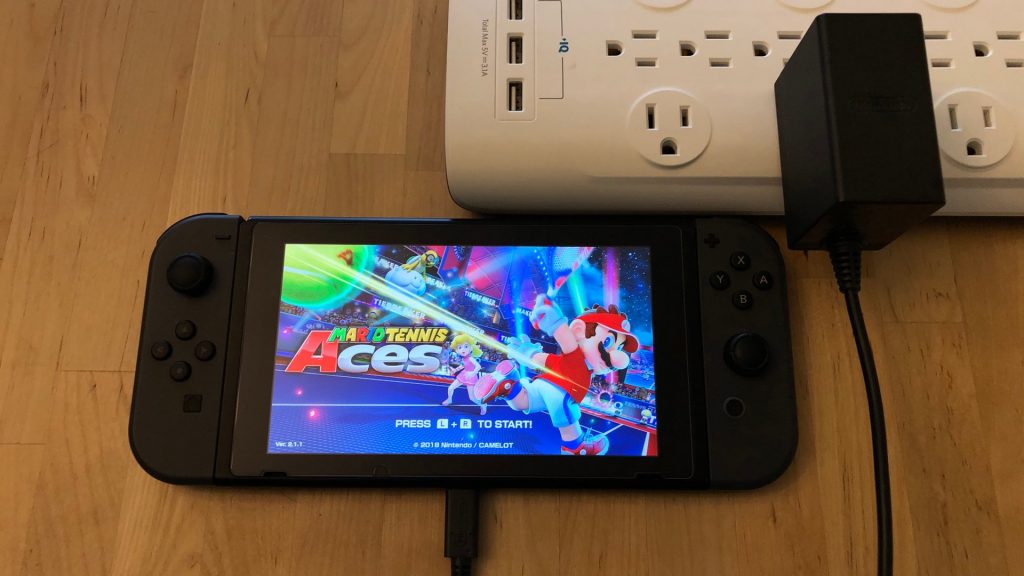 The Nintendo Switch AC Adapter is the charger included with the Nintendo Switch. It works great for the Switch and its accessories. But has a poor selection of power profiles. Making it incompatible with many devices. 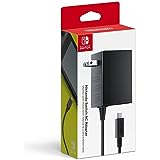 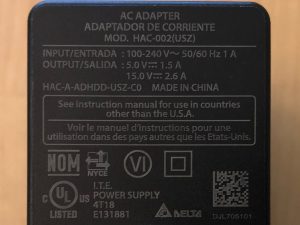 The Nintendo Switch AC Adapter comes included with the Nintendo Switch. It is also available by itself or as part of the Nintendo Switch Docking Kit. It is a typical wall-wart power adapter. The brick is thinner than some, but it’ll still take up more than its own space on a power strip. The built-in USB-C cable limits you to 5 feet, which is good enough for most TV setups. The non-folding prongs complete the not quite travel-friendly design. On the upside it a Nintendo product. So its use is covered under the Switch’s 12-month warranty.

I use an iPhone 8 for testing, which cannot plug into a charger with a built-in USB-C cable. So I don’t have any results.

Based on the specs a Google Pixel or other USB-C phone supporting USB PD would not fast charge. In fact, the charge rate would be slower than with a regular USB-C charger missing USB PD.

Using a Moto G6 for testing we see a pathetic 2W charge rate. The 5V power profile is underpowered. Resulting in a poor charge for this or any other USB-C phone.

The Nintendo Switch charges at its max rate, up to 18W. It’ll fast charge while you play. Its charge rate while sleeping is also normal. This charger can also power the Switch’s dock. All that we would expect from the Switch’s original charger.

Using a 13-inch MacBook Pro for testing we can draw up to 37W from this charger. That’s expected, after accounting for efficiency loss.

Different model laptops have different power demands. But in general, a 39W charger can support 12-inch laptops. And some 13 to 14-inch laptops, if not under a heavy load. The lack of 20V limits how many laptop models this charger will work with. MacBooks and Chromebooks are fine. Others will depend on if they accept 15V or not.

The Nintendo Switch AC Adapter is designed to charge official Switch accessories. You can charge a Pro Controller, Joy-Con Charging Grip, or Poké Ball Plus by plugging in the USB-C cable. They charge better than a phone as they draw less power. Each controller only draws up to 2.5W. Whereas a modern smartphone wants 8-16W. That said, you should charge the controllers through the Switch’s dock. The dock has three USB-A ports, and each can provide 2.5W. The controllers also include the needed USB-C to USB-A cable.

Made To Support the Nintendo Switch Dock

Even docked the Switch rarely draws more than 18W. And I’ve never seen it get anywhere near 39W. So why does it included a 39W USB-C charger? Why not a more standard 18W or 30W option?

The charger’s 39W design does serve another purpose. Nintendo has programmed the dock to not output video unless it detects a USB-C charger that supports 15V/2.6A or more amps. This is to prevent a user from using their phone charger or other weaker power source. A sub-optimal charger could lead to the Switch’s battery continuing the drain and a halt to the gameplay. That would be a bad user experience, so they try to make sure you are using the official charger.

A third party charger with enough output will get around the restriction. Most any 45W or 60W USB-C PD charger will work, as those offers 15V/3A. A few do not as they lack 15V power profiles, with Apple’s 61W USB-C power adapter being the most notorious.

Lack of 9V Support Is Against USB-C Specs

The Switch’s AC adapter supports only two power profiles: 5V/1.5A and 15V/2.6A. The 5V is for the controllers when charging. The 15V is for the Switch and dock.

Under USB PD standards 9V much be included if 15V is present. In this case, we should see 9V/3A, but we don’t. Not only is that a spec violation. It also prevents this charger from work with USB-C phones that support USB PD. As most charge at 9V.

The exclusion of 20V is not a spec violation but again limits device compatibility. Most USB-C laptops and large devices prefer 20V over 15V. And some are 20V exclusive (which itself is a spec violation, but that’s the world we live in).

The Nintendo Switch AC Adapter does what you need it to do out of the Switch’s box. It’ll charge the Switch in handheld or TV mode, and even support any extra controllers your bought. But the limited power profiles makes it less flexible for non-Nintendo devices. And goes against USB-C specs.

It is next to useless as a charger for USB-C phones. Your phone may or show a charge in progress, but it’ll far less than what a USB-A charger could do. Much less a USB-C charger with normal power profiles.

It will work with some small to mid-sized laptops with USB-C. Most notable the MacBook and Chromebook lines. But if your laptop requires 20V it will not charge. It also works with the iPad Pro, provided you have the latest model with a USB-C port.

Power banks with output/input of 30-45W can be recharged with the Switch AC adapter.

It will charge the Switch’s controllers directly. From the Pro Controller to the Poké Ball Plus. But for day-to-day charging, you’re better off plugging those into the dock’s USB-A ports.

I personally leave the Nintendo Switch AC adapter behind my TV, connected to the dock. It rarely comes out, and never to be used on anything but the Switch. There are too many more universal chargers available, many at a lower price.

If you prefer to stay 100% within Nintendo’s support umbrella then this is the only wall charger you should look at. Nothing else is licensed for use with the Switch. But keep in mind the Switch’s warranty only lasts for one year. And the Switch hasn’t had any issues with good quality, third party chargers.

Nintendo of America has U.S. based support (web, email, phone) and a 12-month warranty.

The Nintendo Switch AC Adapter is the safest charger for the Nintendo Switch. And it even works with the Switch’s controllers. But its limited power profiles make it hit or miss with non-Nintendo devices. It is best left plugged into the dock, behind the TV. Get a more flexible USB-C charger for your Switch and other devices on the go.