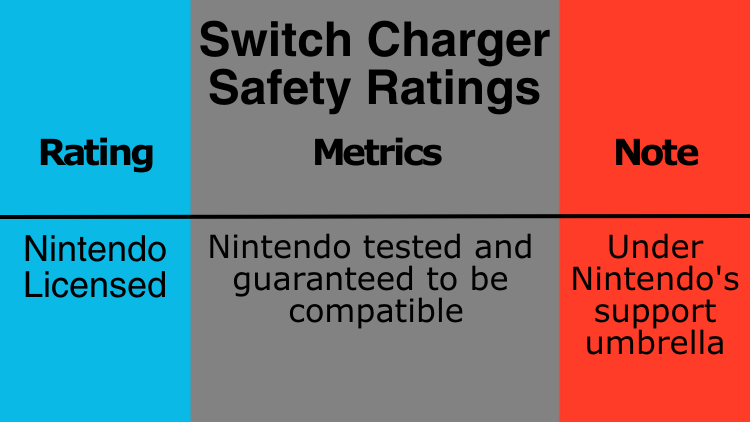 It is safe to charge the Nintendo Switch with a third-party USB charger or power bank. There have been no confirmed reports of quality charger damaging a Switch console. There have been problems with third party docks. But those issues stem from bad Power Delivery protocols on the dock’s power transfer chip. As with any accessory do your homework and buy well-reviewed and quality products. Here we’ll go over Nintendo’s history with third-party chargers. Licensing and certifications you can look for. And why there are concerns with safely charging a Nintendo Switch in the first place.

Listed wall chargers and power banks on this site are considered safe to use with the Nintendo Switch and other devices. You can also check out my reviews which dig deeper into their safety.

Have questions about fast charging your Switch? Check out How Nintendo Switch Charging Works.

Nintendo’s position on using third party chargers varies across their different regions. Their universal message is that unlicensed accessories are not guaranteed by Nintendo. As said when Nintendo of America released this statement during the third party dock bricking scare:

Nintendo Co., Ltd. (parent company, covers East Asia) has a support Q&A for Japan and Hong Kong. They go over using a USB-A power bank with the Switch. They do “not guarantee the operation,” but they do go over getting the best results. Nintendo recommends using the cable included with the Pro Controller and Joy-Con Charging Grip. Or use a third-party USB-C to USB-A cable with a 56k Ohm resistor. Note a USB-C to USB-C cable doesn’t have the same 56k Ohm resistor requirement.

Nintendo of America’s Switch support site discusses using the included AC adapter. They make no mention of other charging options.

An episode of Nintendo Minute featured travel tips for the Switch. In it, they suggest having power banks for long flights. They showed off unreleased MimoPowerDecks with Nintendo licensed designs, which are USB-A power banks.

It is important to note that none of these statements have specific concerns with safely charging the Nintendo Switch. Nor has any other statement from Nintendo. They are reasonably covering themselves from liability when it comes to accessories they do not control.

Nintendo licensing means Nintendo has tested a product. And guarantees its compatibility and performance with their console. As well that it will safely charge the Nintendo Switch. Licensed by Nintendo products offer Switch owners a way to use an accessory not made by Nintendo. But remain under Nintendo’s support umbrella. 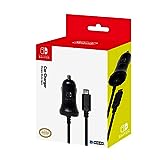 There are no licensed, third party wall chargers. Only Nintendo’s own Switch AC Adapter.

The USB Implementers Forum (USB-IF) is a non-profit organization. Formed by Agere Systems, Apple, HP, Intel, Microsoft, and NEC. It promotes and markets USB. It also maintains USB specifications and a standards compliance program. They offer certification (USB-IF certified) for USB-C products that meet their strict compliance. To gain certification a product must pass their USB-IF Compliance Program. And the producing company must be a dues-paying member of the USB-IF.

In the first couple of years USB-C was on the market there were problems with poor quality USB-C cables. Some damaged smaller electronics. With today’s cables, this is rarely the case. Most of the bad cables were found and pulled before the Switch’s release. And USB-IF certification was also introduced. Amazon has taken efforts to remove known bad cables from their listings. But you should remain vigilant when buying cables. Especially from an unknown brand with few reviews.

You would use a USB-C to USB-C cable with the Switch and a USB-C charger. Most of any you find today can safely charge the Nintendo Switch. There are many more certified cables than chargers. And those from big brands are reasonably priced.

You can use an older USB-A charger with the Switch. But USB-A doesn’t support the communication line USB-C uses to “negotiate” power transfer. As a result, it is possible a USB-C device could attempt to draw 3A from a USB-A power source. And most USB-A power sources cannot handle 3A. This could result in an overdraw, potentially damaging the charger. And in rare cases the Switch.

USB-C to USB-C cables do not need the resistor, as they do not suffer from the same overdraw issue.

Listed USB-C cables on this site are considered safe to use with the Nintendo Switch and other devices.

Nintendo Switch is Not USB-C Compliant

The Nintendo Switch does not fully conform to USB-C specifications. Partly because its development pre-dated the finalization of USB-C specifications. And partly because USB-C is a complicated system that supports lots of technologies. Few devices, including the Switch, support all included capabilities. So it isn’t uncommon for a device to “skip” over the parts it doesn’t use. This disrupts the universal compatibility promised by USB-C. But given the costs involved it is unexpected. And Nintendo is by no means alone when it comes to such practices. But lack of compliance does not necessarily mean safely charging the Nintendo Switch is difficult. 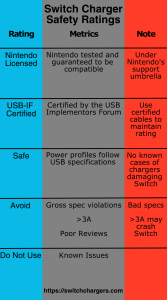 Nathan K, a hardware engineer who does reviews of USB-C accessories, tested the Switch in May 2017. He found many issues where the Switch did not behave as it should according to USB-C standards. His posts were the source of warnings the Switch could overdraw by 300%. Unfortunately, his original post is no longer available. As it was on Google+, which has since shut down.

The overdraw mentioned occurs with a docked Switch connected to an Anker USB-C power bank. The Switch requests 15V/0.5A. The power source re-advertised its available options. When it did the Switch improperly shifted to 1.5A (a 300% increase). It did so without proper negotiation, which is against the Power Delivery protocol.

Nathan specifically notes concerns with power banks, 2+ USB-C chargers, and >3A chargers. The overdraw occurred during a split PDO. A split PDO is when a power source advertises one set of Power Data Objects (PDO), then lists a different set on a second advertisement. At the time of his post, those types of chargers tended to use split PDO. It has since become normal behavior for more USB-C PD chargers. It is used to offer a lower, safer power profile at first and figure out the optimal power profile later. For the end-user, their device starts charging immediately, without signs of delay. For the device, it and the charger work out the best power profile to use safely.

Nathan also noted the issue could be resolved with a firmware update.

In another post, Nathan sees similar behavior with a handheld Switch. But he doesn’t give the same warning. The Switch requests 0.5A then moves on to full amperage. The behavior is a function of the Switch. It is against USB-C protocols and causes errors, but it appears to be intentional. Nathan also notes a lot of USB-C products from 2016-2017 are outside of standards. When the Switch was being developed standards were volatile and certification testing unfinished. Because of this many USB-C devices on the market are outside USB compliance.

At the time of the test, no Anker power bank had enough output to power a docked Switch. This was done before Nathan found a docked Switch will only operate with a specific power profile (15V/2.6A).

The 1.5A draw in and of itself isn’t dangerous to the Switch or USB-C power source. Both are capable of the current. And improperly changing voltage is far more likely to result in damage. Regardless, the behavior is not allowed under USB-C PD standards.

Since the test (May 2017) several firmware updates for the Switch have been released. Nintendo does not share complete details on these updates. So the issue may be no longer present. Nathan borrowed his test Switch and has not revisited his work. To date, there have been no confirmed issues reported between a Switch and a power bank. In the summer of 2018, Nintendo licensed USB-C power banks from Anker for use with the Switch.

Nathan’s comment to the Switch community more than a year after his tests was to remain calm. He stood by the data, but it is old and he is a lone tester. The technical information is complicated, as is the USB-C PD protocol.

A 65-100W USB-C PD charger does so by providing more than 3A at 20V. The Switch doesn’t make use of 20V. But such chargers negotiate differently than a 15-60W charger. They need to verify the connected USB-C cable can handle more than 3A. And unfortunately, there isn’t an industry-standard way to do so.

Most USB-C cables only support up to 3A. Those which support 5A must also include an eMarker. Which is used to share the cable’s capabilities with the charger and device. The ideal way for high output chargers to negotiate is to advertise up to 60W when a device is connected. Then re-advertise (split PDO) its full capabilities once it verifies the cable’s eMarker.

But the ideal is not always how things work. Apple’s 87W USB-C power adapter offers 20V/4.3A. To deal with potentially non-5A cables it forces the device to 5V/2.4A (12W, way below 60W) until it can verify the cable. This behavior has caused reports of forcing a restart of the Switch. Those many users report no issues, too.

Other high output chargers can approach this issue in other ways. As such they should be taken on an individual basis. Rather than all clumped together as being good or bad for the Switch and other low power draw devices.