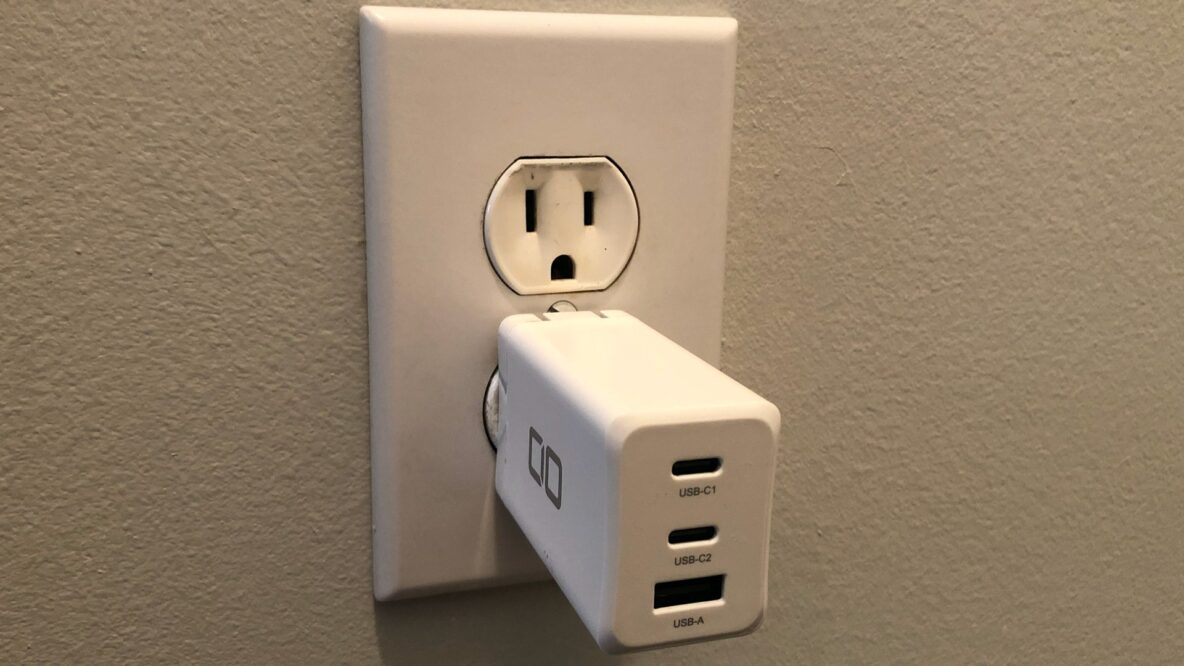 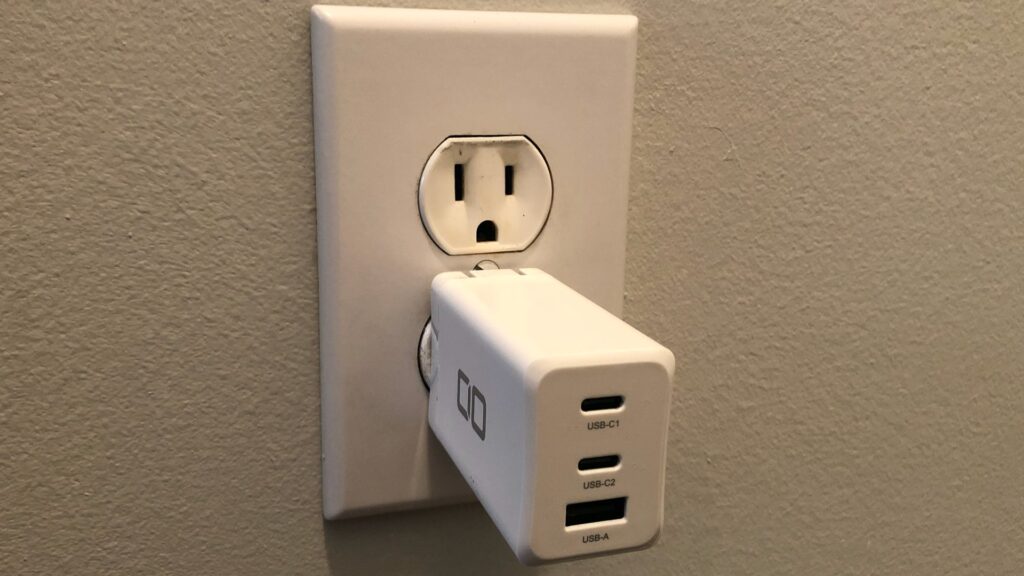 CIO 65W USB-C GaN - Half the size of a MacBook Pro power adapter, with three times as many output options

The CIO 65W USB-C GaN makes the most of combining newer and older fast charging technologies. With benefits for all USB-C users without leaving behind your last USB-A device.

Disclosure: As an Amazon Associate I earn from qualifying purchases. CIO provided the product in this review. 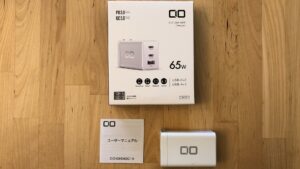 The No products found. is the type of charger geeks were wanting when GaN tech first made the jump to USB power adapters. A logical combination of small size and high output. The “half the size of a credit card” statement is a little misleading. It is the same width and half the height of a credit card, but the full thickness of a charger. I prefer comparing it to an Apple 61W USB-C power adapter, as this charger is just under half its size with the same thickness.

Plugged into a wall outlet, it leaves plenty of room for the other plug. It does protrude from the wall more than some more square models, though it is still less than the charger included with a MacBook Pro. The size or shape matters less if it can replace two or more chargers at home, work, or travel.

Prices are from Amazon Product Advertising API, last updated on 2021-08-02.

Using a Moto G6 for testing, we see Quick Charge will fast charge over the USB-A port. The Moto G6 fails to get QC over USB-C as that is an issue with that particular model phone. Newer Motos and other Android phones would fast charge under the same connection.

On spec it should work with the Nintendo Switch dock, but my testing shows it does not. The Switch’s dock is particular about its power sources. The variable offerings of the USB-C ports is likely causing the incompatibility. The issue lies with the design of the dock more so than anything else.

Using a 13-inch MacBook Pro for testing, we can draw up to 50W from this charger. A little less than the typical 55W, but within the margins of error after accounting for testing conditions and efficiency loss.

Different model laptops have differing power demands. But in general, a 65W charger can support up to 13-inch/14-inch laptops under any condition. It can also support a 15-inch laptop under light use. Or charge it while sleeping.

Fast Charging Several Devices At Once

The multi-port fast charging is a great feature, but be sure you understand its limitations. You’ll need to use the right USB-C port with the right device to get the fastest charge possible for all your devices.

Either USB-C port will support up to 65W by itself. If both USB-C ports are connected, the top port (USB-C 1) will support 45W. The middle port (USB-C 2) will only support 18W. So your larger device should always plug into the top.

Note that connecting a Lightning cable will cause that USB port to act as if a device is connected. Even if your iPhone/iPad is not on the other end. It is a known function of Apple Lightning cables. 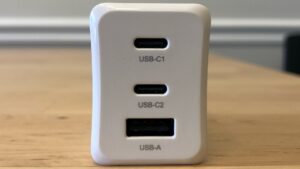 Programmable power supply (PPS) protocol was added in USB Power Delivery 3.0. But not all PD 3.0 devices and chargers support it. It is uncommon now, but will grow in use. It allows for small, step-wise changes in voltage and current. This reduces conversion loss during charging. The power transfer is more efficient and lithium batteries endure less heat.

What does that all mean? If you have a PPS or Quick Charge 4+ supported device then this charger will fast charge it like any other USB-C PD. But will also put less stress on your device’s battery, increasing its lifespan.

If your devices don’t support PPS this tech will have no effect. You will be future proofed for a future PPS device.

CIO’s 65W output requires a USB-C cable with an eMarker and support for 5A current. Such cables are not uncommon, but nor are they what you usually find with a simple search.

So if you connect most any other USB-C cable you have to this charger it’ll limit itself to 60W. That’s fine if your device only draws 60W or less. Even if your device can draw 65W then missing 5W isn’t going to be noticeable. But if you want the full 65W you’ll need to get the proper cable.

GaN (gallium nitride) is a replacement for traditional silicon. It can sustain higher voltages than silicon and offers less resistance to current. That makes it more efficient (10-25%) and able to handle more heat. In 2014 GaN performed the same as silicon 3-5 times larger. The most recent leap (2017) reduced the size of GaN transistors to half their previous size.

GaN is not new. It is in the laser diodes of Blu-ray players. And the transistors in various wireless infrastructure. In 2018 we started to see USB-C chargers with GaN hit the market. Since then many brands have released GaN chargers. With more on the way.

There isn’t an output advantage for GaN chargers. A 45W GaN charger charges as fast as a 45W silicon charger. And both heat up to similar temperatures. The difference is the GaN charger is smaller and lighter. While matching the silicon charger’s performance.

Costs continue to drop, but GaN is still more expensive than silicon. As such GaN chargers are usually priced at the high end of their peers. As with many things getting the smallest and lighter version costs a bit more.

The presence of Quick Charge over USB-C is against USB-C specifications. Such chargers have been around for years without issue. But that is not a guarantee of perfect compatibility for all devices.

Under section 4.8.2 of USB-C specifications, a proprietary charging method cannot change the voltage of USB-C output (between 4.40V and 5.25V) in a manner not defined by USB methods. Quick Charge operates at higher than default voltages and so goes against the specifications. USB Power Delivery is an open-source charging method. Created alongside USB-C, it is with specs even though it also increases the voltage. The big difference is USB PD uses communication lines to negotiate power transfer. Proprietary methods take over the data lines for their negotiation. They do so because legacy USB connections, such as USB-A, lack comm lines.

There is no known risk with running proprietary charging standards over USB-C. Manipulating the data lines does disrupt data transfers. But when plugging into a wall charger or power bank, there is no data transfer anyway. Some engineers warn against using any USB-C chargers supporting third party standards. The concern is unforeseen consequences, with future devices having compatibility issues.

I have not run into any issues with these fast charging standards on this or any other charger. It is a spec violation, and as such, you should be aware.

The CIO 65W USB-C GaN isn’t the smallest USB-C charger on the market. But it offers a lot more output than the tiny models. The inclusion of PPS future-proofs the purchase, and keeping a USB-A port eases the transition from older to new tech.

Fast charges LG, Motorola, and any other Android which supports Quick Charge. As well as supporting the old FCP standard for Huawei phones.

Nintendo Switch fast charges in handheld mode as fast as any other option. But the dock rejects it as a compatible charger. Probably just as well, as using the other USB ports would interrupt power to the system.

This charger is ideal for fast charging a large and small device together. It’ll also work for two smaller devices. But it doesn’t have the output balance to support two devices wanting more than 18W each. It is not a good idea to plug in three devices at once. Treat the middle USB-C port and USB-A port as options rather than a combo, as they share the same power circuit.

The size and output options are best for those with a mix of USB-C and USB-A devices. You get the benefits of a dual USB-C charger without leaving your Quick Charge devices behind.

About CIO (Connect International One)

CIO is a smartphone accessories manufacturer out of Japan. Until recently they mostly operated in Japanese ecommerce sites, but have now come to North America via crowdfunding and Amazon. There is a 6 month warranty, bupport outside of Japan is limited. Expect to contact them through Amazon. You can see a translated version of their website here.

This particular charger started as an Indiegogo project, but is now available for retail sale.

The CIO 65W USB-C GaN brings together newer and older fast charging tech into a compact and travel-friendly charger. It supports mid-size laptops, phones, and other handheld devices. The PPS support is for the latest tech, while USB-A Quick Charge doesn’t leave your older devices behind.