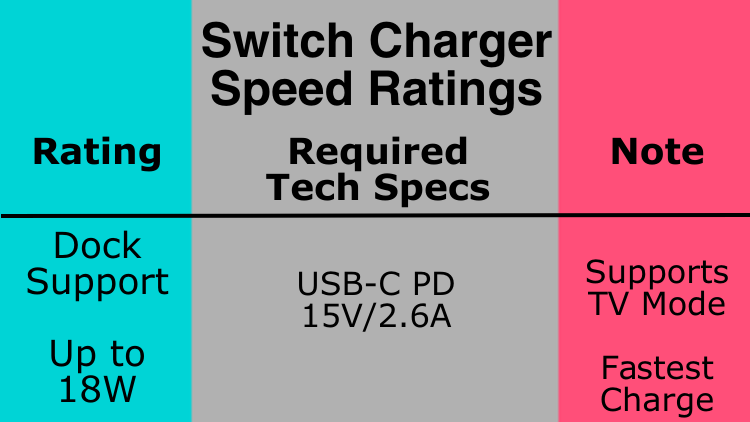 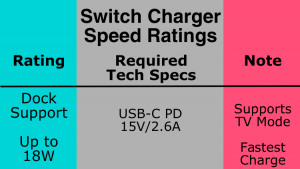 I’ve done a major update to my Nintendo Switch speed ratings for USB-C chargers. I’ve added a new rating level and adjusted where certain charger specs fall on the chart. This also required a renaming of several levels to keep the system intuitive. This was all done based on new testing data I’ve seen and received over the last month. This new data contradicts assumed charging values given shortly after the Switch launched. I used some of those values in my earlier speed ratings. This new information won’t be of significant impact to most Switch owners. But I wanted to share what I had learned, and go over the data for anyone interested.

You can skip ahead to the new rating chart here.

The Nintendo Switch has a current (amps) draw limit, besides its max draw limit. The numbers vary depending on the voltage. But under no test case will it draw more than 80% of the current a charger can provide.

If up to 80% of the current can provide ~18W, then the Switch meets its max draw limit. Otherwise it stops drawing at 66% to 80% of the available current.

This behavior isn’t unique to the Switch. It can be seen with many USB-C Android phones. For example, the Moto G6 USB-C phone can support up 16W power draw. It does this using Quick Charge 3.0 or Motorola’s own TurboPower tech. So in theory a regular USB-C charger offering 5V/3A or 15W should charge it almost as fast. But instead it limits itself to 5V/2A or 10W. The same as the Switch. Under USB-C specs it should support the full 15W, but it doesn’t.

I’ve had the advantage of testing a larger variety of chargers and power banks with the Nintendo Switch. Much more so than anyone who did initial charge testing with an early Switch. Without testing some specific specs I wouldn’t have come across this new information. After learning the Switch draws up to 18W it made sense to assume a 9V/2A charger (which is 18W) would provide said 18W. I saw those reports and they made sense to me, too. I’m not here to disparage previous work done. I’m here to share new data that changes our conclusions.

The test data below used a Nintendo Switch in handheld mode. The battery was >50% charged. Legend of Zelda was running in a high usage zone. Screen brightness set to max. Wireless enabled. Conditions designed to induce max power draw.

I found the 9V/2A vs 9V/3A differences testing a Google 18W USB-C charger. And an older Apple 61W USB-C power adapter. The 2018 version of the Apple power adapter supports 15V, so you won’t get the same results. 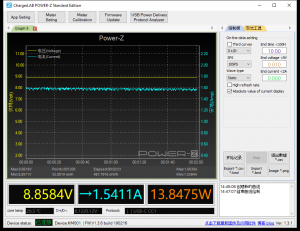 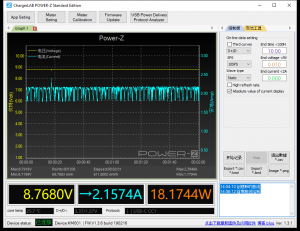 With either charger the Switch uses the 9V power profile. With 9V/3A it reached its ~18W draw limit. It should be able to do the same with the 9V/2A charger, but it doesn’t. It limits itself. I never saw more than a 14.4W draw. Or 80% of the available current.

I received a report and test data from a reader. They had bought and tested a Belkin USB-C car charger that offered 12V/2A. Based on my previous ratings they expected to see the Switch draw 12W. Instead they saw 18W. We went over the testing method and it matched up with my own.

I found that the 12W limit with the 12V/1.5A chargers at my disposal meant only 66% of the current was being drawn. That is the same limit seen with 5V/3A USB-C chargers and the Switch. It only draws up to 5V/2A, or 66% of the available current.

On its own I found the coincidence interesting, but chose to not draw attention to this one result. USB-C chargers ending with 12V/2A are mostly found on car chargers. Which most Switch owners don’t use. It wasn’t until I found the 9V and 15V results above that I saw a continuous pattern.

The differences between 15V/1.2A and 15V/1.5A (and higher currents) can be seen with two Anker power banks. The new Anker PowerCore 10000 PD is the smallest and lowest current 15V model on the market. And the Anker PowerCore 13400 Nintendo Switch Edition was made with the Switch in mind. 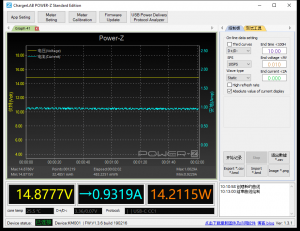 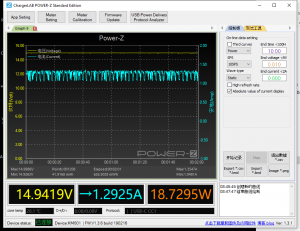 My ratings are not an endorsement or review. They are a reflection of the device’s specs in comparison to known factors of charging a Switch.

Dock Support – Before called Superb. There’s no other changes to this level. I took the opportunity of the update to rename it, in hopes it will reduce confusion. While at the top of the chart this level charger is not needed for handheld or tabletop play. The next level down will charge as fast in those modes. And often at a lower cost.

Excellent – Before called Great. As before, this level charger allows the Switch to draw its full 18W when needed. This provides the fastest charge possible in handheld mode. Besides changing the name the tech specs required to reach this level have also changed. This is after finding that 9V/2A and 15V/1.2A do not provide a full 18W to the Switch. While 9V/3A and 12V/2A do provide a full 18W. I also learned that a 12V charger with at least 2A can provide 18W.

Great – This is the new level. I have found that 9V/2A and 15V/1.2A chargers provide up to 14.4W to the Switch. Short of the 18W max draw limit. As such I felt these chargers needed to be in their own ranking. Between the fastest and slowest USB-C chargers. The 14.4W provide will charge the Switch at a fast rate while you play the most demanding games.

Good – Before called Good+. The Good+ level was added in my last big update. When I learned that 12V/1.5A (thought to provide 18W) actually only provided 12W to the Switch. As it was 2W more than the Good ranking I added it as Good+. With the other changes in this option I shifted the scale to remove the plus. There’s no changes to tech spec requirements for this level. And 12W is enough to charge while you play.

Fair – Before called Good. There’s no changes to tech spec requirements for this level. At 10W you can charge while you play, but slowly under some conditions. The highest power usage observed on the Switch (in handheld mode) has been 8.9W. A Fair rated charger will power the Switch and have 1W or less left over to charge the battery. That said, the Switch will not maintain an 8.9W power draw. It varies by game and even in game location, so the battery will charge at a faster rate on average.

Passable – Previously called Good Enough. There’s no changes to tech spec requirements for this level. But I did testing to verify the information was correct. This is where most high output USB-A chargers fall. Depending on the game and settings the 7.5W provided could maintain the Switch’s battery level. If plugged in while at 100% the Switch can run for hours with little to no drop in battery level.

Poor – No change. This is where iPhone and other small/cheap phone chargers fall. This will provide power to the Switch while running, but the battery will continue to drain. If being used it is best to charge the Switch while it sleeps.

What Does This Mean For Me?

Honestly, not much. I wrote this more to explain why I was making a change on my speed rating system. And for those who like to understand the technical details.

Any charger or power bank you already use with the Nintendo Switch will work as well as it did before. Some models will have slid down the scale. But if you’ve been happy with their performance there’s no reason not to continue to use what you have. Any decent USB-C charger will keep up with the Switch as you play. And any decent USB-C Power Delivery charge will charge at a good rate.

For anyone looking at buying a new charger or power bank you now have a more accurate guide. Which can help in finding the best performance for your budget.

I have updated the charger and power bank listings on this site to match the new speed rating scale. And I will be updating older posts and reviews to reflect the new information.

Find out more about the Speed and Safety ratings I use to help compared chargers and power banks for the Nintendo Switch.