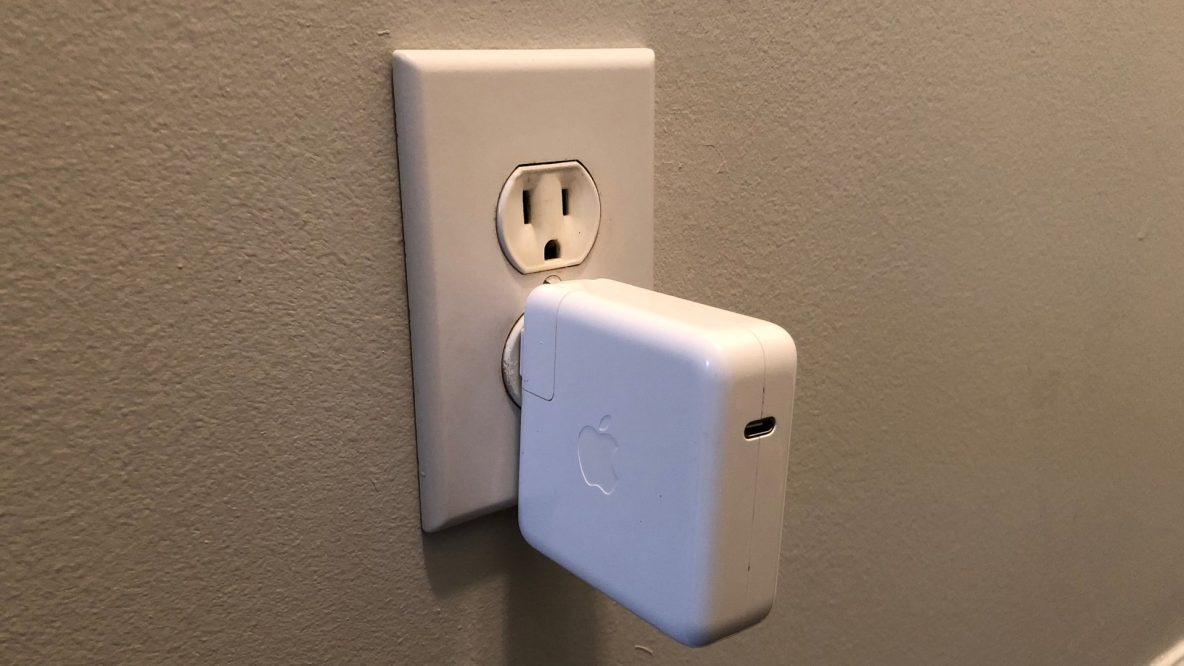 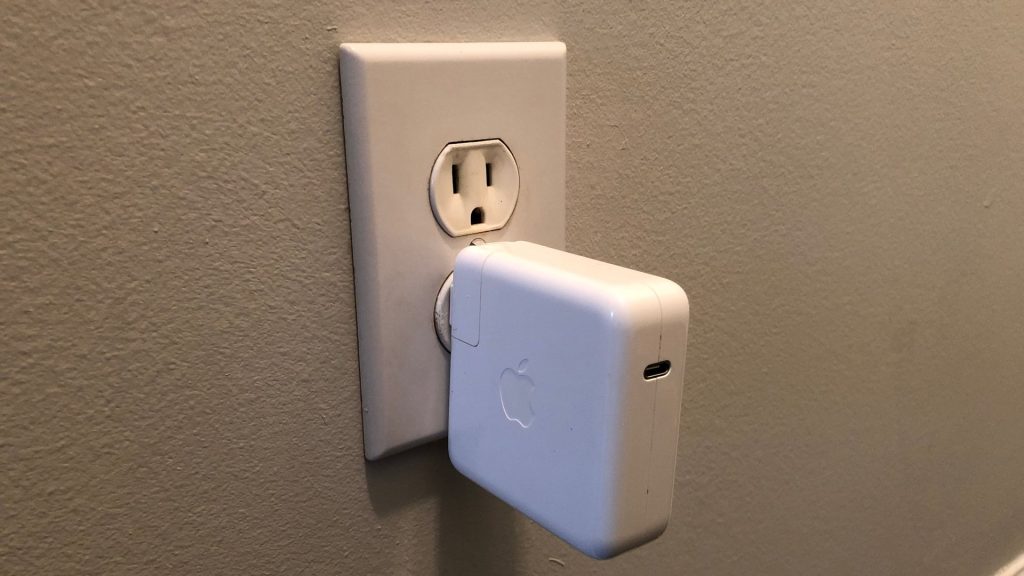 The Apple 61W USB-C power adapter (MNF72LL) came with 2016-2017 13-inch MacBook Pros. Designed with only Apple products in mind. It shows how ignoring USB-C specs makes a charger less useful for other devices. 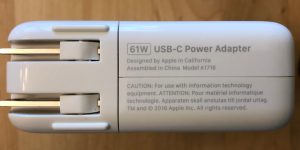 The Apple 61W USB-C power adapter (MNF72LL/A) was among Apple’s first USB-C power adapters. It came with the 2016-2017 13-inch MacBook Pros. A USB-C to USB-C cable was also included with the laptop. But if you bought a second power adapter no cable was included. The design was almost the same as the MagSafe power adapters that came before it. The biggest difference, other than USB-C, is the lack of an extension cable that came with the older models. Its power output was designed with the 13-inch MacBook Pro and iPhone 8 and X in mind. So much so that Apple didn’t provide a 15V power profile, which has since bit them in the butt.

Using a Moto G6 for testing we get normal charging rates. As no Quick Charge or compatible fast charging, the standard is supported that’s as fast as it goes. Still, 9W is a decent charge rate.

The Nintendo Switch charges at its max rate, charging while you play. Its charge rate while sleeping is better than average. But it won’t power a docked Switch. That requires 15V support, which this charger lacks.

Using a 13-inch MacBook Pro for testing we can draw up to 28W from this charger. That’s expected, after accounting for efficiency loss.

Different model laptops have different power demands. But in general, a 60W charger can support up to 13-inch/14-inch laptops under any condition. It can also support a 15-inch laptop under light use. Or charge it while sleeping.

That said, this charger supports 20V, but not 15V. Any laptop that uses 15V only for charging will not work with this charger. Best to keep it with Mac laptops.

When Apple introduced new MacBook Pros in 2016 it was their second product to include USB-C. The Apple 29W USB-C power adapter had come out in 2015 with the 12-inch MacBook. All their early USB-C chargers followed similar design guidelines. They were made to support only current Apple products. And all three went against what would be USB-C specifications for such chargers. Even though Apple was a founding member of the USB-IF. In Apple’s defense, USB-C standards were still in flux when these early chargers were designed. And USB-IF certification wouldn’t be available for more than a year after their retail release.

Apple’s tunnel vision for current Apple products made these chargers less desirable for non-Apple products. And it has even affected their performance with the latest iPad Pro models.

The 87W USB-C power adapter offers 5.2V/2.4A, 9V/3A, 20.2V/4.3A. Like the 29W model, it is using a voltage not supported under current USB PD specifications. And it is missing 15V support like the 61W model. This charger also takes a weird approach to how it verifies whether the USB-C cable can support its full 87W. Most similar chargers offer a device up to 60W until the cable is verified. Apple only offers 5.2V/2.4A (12.5W) until it is done verifying the cable. This has been known to cause crashes with the Nintendo Switch, partly due to the Switch’s own inadequacies.

In 2018 Apple replaced their 29W and 61W USB-C chargers with new 30W and updated 61W USB-C models. They also introduced an all-new 18W USB-C power adapter, including the new iPad Pro with USB-C. All three of these new chargers conform better to USB-C standards.

The 18W USB-C power adapter offers 5V/3A and 9V/2A. That’s typical of many 18W chargers. It rates as Great for the Switch.

The 87W USB-C power adapter, unfortunately, has not been updated. It is still missing 15V support. Hopefully, we’ll see a change with a future 15-inch MacBook Pro update.

The Apple 61W USB-C power adapter (MNF72LL/A) is ideal for a 13-inch MacBook Pro. And will fast charge a newer iPhone or pre-2018 iPad Pro. But its lack of 15V support makes it perform less expensive peers with other devices. Including the 2018 iPad Pro with USB-C.

It’ll fast charge non-Apple phones that support USB PD, such as the Google Pixel. Other Android phones can charge at their normal rate.

For the Nintendo Switch, it charges in handheld mode as fast as any other option. But it cannot power a docked Switch due to its lack of 15V support. This was changed in 2018. Newer models will work as well in handheld mode and support the dock.

The charger doesn’t offer anything to make up for its lack of 15V support. Even discontinued it costs more than Anker, Inateck, and Nekteck 60W USB-C chargers. And it is larger and heavier than most of them. Its only redeeming value is Apple support. But unless you bought AppleCare that doesn’t matter now.

If you already have this charger it will best serve you by staying at your workstation. If you only own a MacBook Pro and iPhone then it’ll work as a travel charger, too. Otherwise, get a more flexible 60W USB-C charger that can work with all your devices. And use that for commute and travel.

Apple has U.S. based support (retail, web, chat, email, phone) and a 12-month warranty. If you purchased AppleCare for your MacBook Pro it also covers the included charger.

The Apple 61W USB-C power adapter is great at what it was designed for: powering the mid-sized MacBook Pro. The 2016-2017 models will also charge a Nintendo Switch in a handheld mode quite well. But they won’t power the dock. The 2018 and later models can support the dock. It is fine to use with the Switch if you have one already. But if buying a new charger there are other great 60W USB-C PD chargers available for much less.