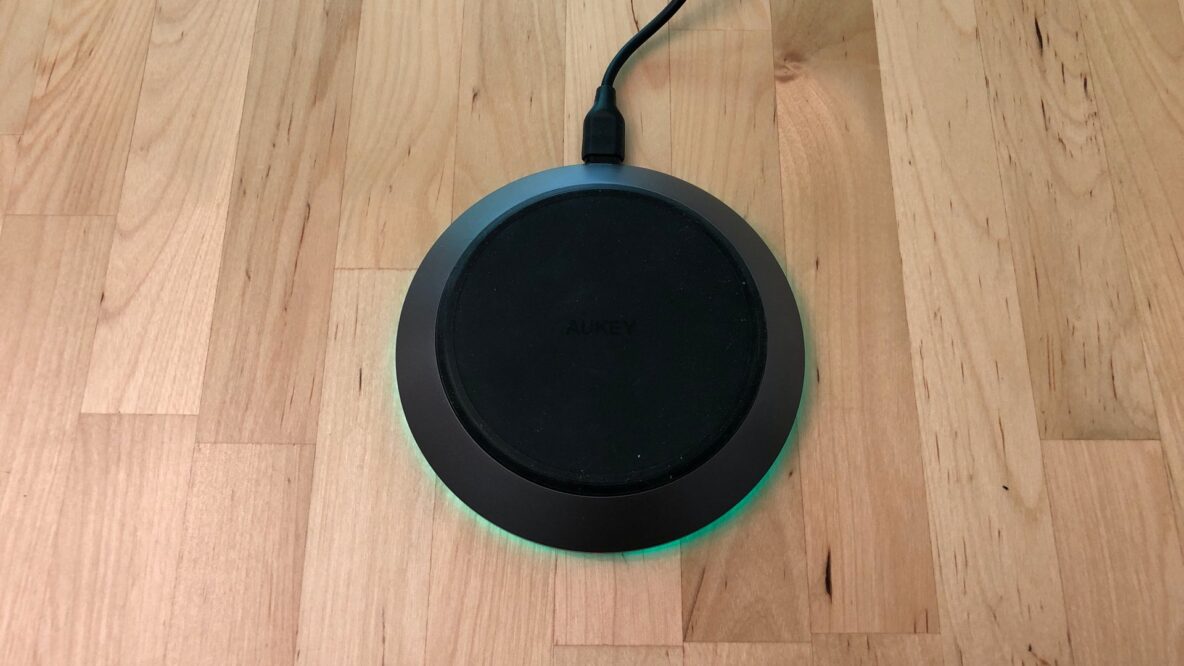 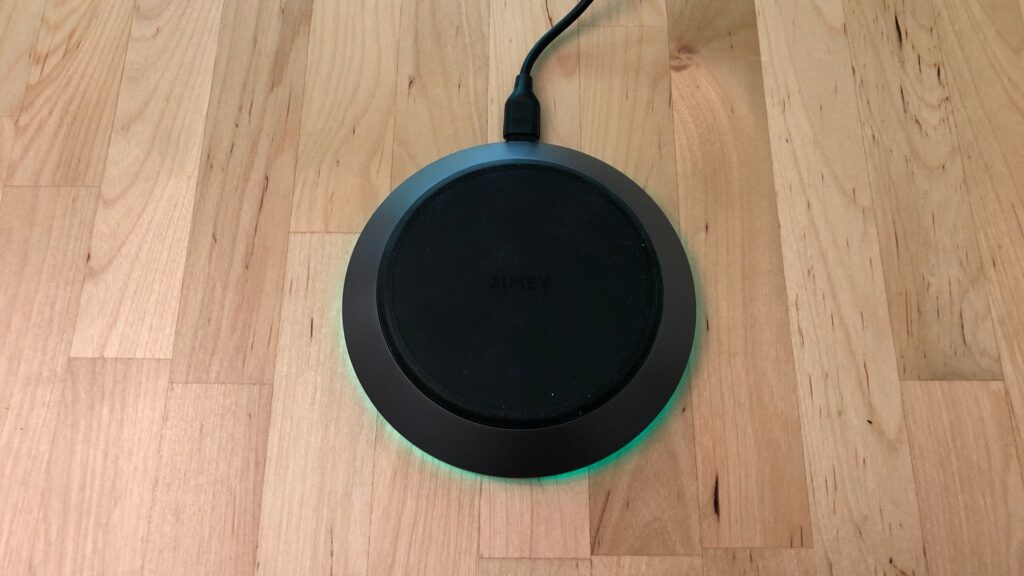 The AUKEY LC-Q11 Graphite Podium Wireless Fast Charger is a premium charging pad. Ideal if you have a newer model phone supporting fast wireless charging. Or to charge your current phone and future proofing for your next upgrade. 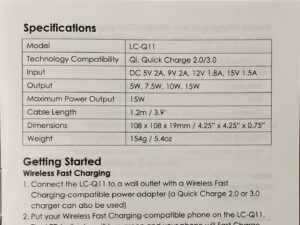 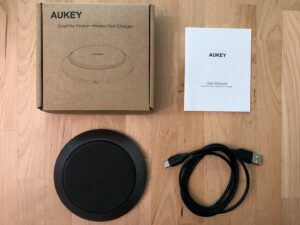 The AUKEY LC-Q11 Graphite Podium Wireless Fast Charger is taller and heavier than other wireless charging pads I’ve worked with. After the rubber, non-slip top is a zinc alloy base which looks good and helps with heat. Followed by another non-slip pad on the bottom so the charging pad itself doesn’t move. The front has a small and dim LED indicator, nothing that should bother you next to your bed. The back has a USB-C port, compatible with various USB fast chargers.

On the under side are on/off switches for the two features some will like while others will not. There is an internal fan to help cool while fast charging. That can be switched off if you’d rather make it quiet with the understanding charging may take longer. And there is a green, ambient light which looks nice in the day. But would be disturbing at night, so a button turns if on or off. 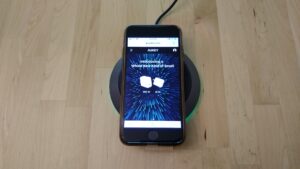 The power output from this wireless charging pad depends on what your device supports and what type of USB charger it is connected to. Using a wireless power meter I tested three different USB ports: USB-C PD, Quick Charge 3.0, and standard USB. All three ports were from the same charger, the AUKEY PA-Y13 46W PD Charging Station.

We see more than 15W going into the wireless charging pad. Which makes sense, as some power is lost through various inefficiencies. My wireless power meter gets a bit over 12W. Given the limits of the power meter I can see the pad offering closer, if not quite, the full 15W to a compatible phone.

Again more than 15W is going into the wireless charging pad. And again my wireless power meter gets a bit over 12W.

With regular USB-A we see more than 6W going into the wireless charging pad. And around 4W coming out the other end. Again this is expected after accounting for power inefficiencies.

The AUKEY LC-Q11 auto detects the wireless charging capabilities of your phone. And adjusts its output accordingly. Provided the charging pad itself has enough power input (is using a USB-C PD or Quick Charge charger). You cannot manually select which charging speed you get. 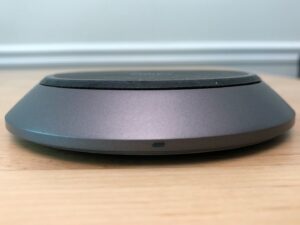 If you have a different Qi wireless charging phone check its specifications. But this pad should support it at an optimal rate.

This wireless charger would also be good for future proofing. If you have an iPhone you can get away with a 7.5W or 10W wireless charger. But this model will still be optimal should your next phone support 10W or 15W.

Unlike lower power wireless chargers, this model includes an internal cooling fan. It allows for cooling of both the charging pad and your phone. Maintaining a lower temperature allows the charger to maintain fast charging longer.

AUKEY advertises the fan as silent, but it isn’t. When the fan is running (under fast charging conditions) it can be heard distinctly up close. But at two feet away it is more quiet background noise than a disturbance. While testing I could make out the wireless pad’s fan in a quiet room. After turning on my desktop PC (a couple more feet away) its fans drowned out the charger’s.

So in a quiet space, like your bedroom, you can hear the fans. But unless the pad is right next to your head it shouldn’t be a issue for most. In an office setting with other machines running you’ll hardly notice it after a minute or two.

I tried to capture the fan noise in the video above, but even close up the mic can’t really make it out. Illustrating how minimal the noise is. During this brief filming the iPhone’s battery went from 10% to 22%. 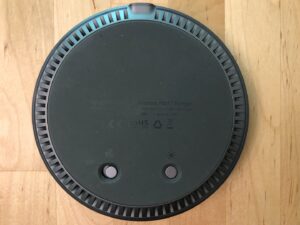 You can turn the fan off with a switch underneath the charging pad. With the fan off temperatures will rise. If they reach a certain point it will disable charging to product your phone’s battery. There is no safety concerns with the failsafe, but don’t expect as fast of a recharge.

There are two light sources on the wireless charger. The lesser is a small LED indicator on the front. It will always remain on, showing the current status of the charger:

The brighter is the green, ambient light underneath the pad. During the day it is low level without glare. At night could be a comfortable night light. Or a big distraction while you try to sleep. There is a button on the underside of the charger which turns on and off the ambient light.

With non-slip pads on both the top and the bottom the charging pad doesn’t move from a casual push. Such as when putting your phone it. Likewise your phone stays put once on the pad. So much so that to adjust it you’ll need to pick it up rather than push it. All this means your phone will stay on the pad and keep charging. Even if the surface it is on gets bumped. 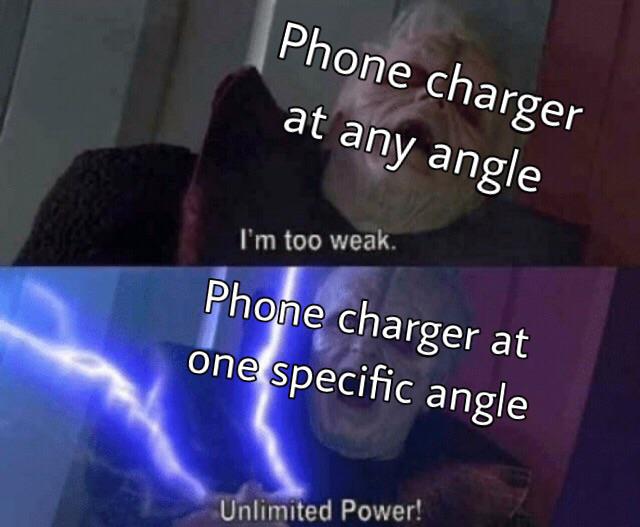 The pad is a good size for most phones. But is still only a single coil charger, so you’ll want to aim for placing your phone in the center. As with other charging pads placing the phone most of the way on it isn’t enough. In some cases when I placed the phone poorly the LED starting blinking, meaning there was an error. I had to pick up the phone completely to reset and establish a charge.

If new to wireless chargers be sure to pay attention to the LED indicator your first few days. It should be solid green, indicating a good charge. Once you’re use to its placement needs it’ll become second nature.

The AUKEY LC-Q11 Graphite Podium Wireless Fast Charger is one of the fastest wireless charging pads available. Its 15W output is as high as the tech goes currently. And it can support that with either a USB-C PD or Quick Charge charger. But most phones won’t actually get the full 15W benefit right now. 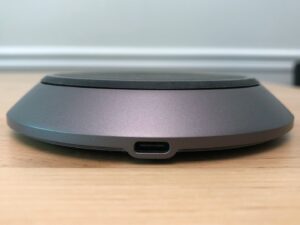 Newer LG phones (V series, G8, G7) can draw up to 15W. They will work with older, slower chargers. But at a noticeable charge rate if topping off during the day.

Samsung Galaxy phones from the last few years will draw up to 10W. And iPhones with wireless charging will get up to 7.5W. Meaning AUKEY’s charger still outperforms the more basic 5W charging pads.

If you have an LG or other phone specced for 15W Qi wireless charging this pad is a no brainer. For other model phones it’ll work as well as anything else. And will provide future proofing for your next model phone. iPhones are expected to go wireless only in the next year or two. If they jump up to 15W this charger will serve you well today and a couple of years from now.

The fan noise and ambient light are hit or miss features for any charger. Some will appreciate them, others won’t want them next to their bed. By including on/off switches for both AUKEY can make everyone happy. Just setup your charging pad the way you want.

If you would rather use USB-C PD you can, you just need to provide the needed USB-C to USB-C cable.

AUKEY has U.S. based support (web and email) and a 24 month warranty. You must have purchased the product either from them or through Amazon for support.

The AUKEY LC-Q11 Graphite Podium Wireless Fast Charger ticks all the boxes for wireless charging. Supporting from 5-15W output. Working with USB-C PD or Quick Charge input. A built-in fan to keep fast charging longer. Ambient light to give it some ascetics. And on/off switches for the fan and light, in case you don’t want them.