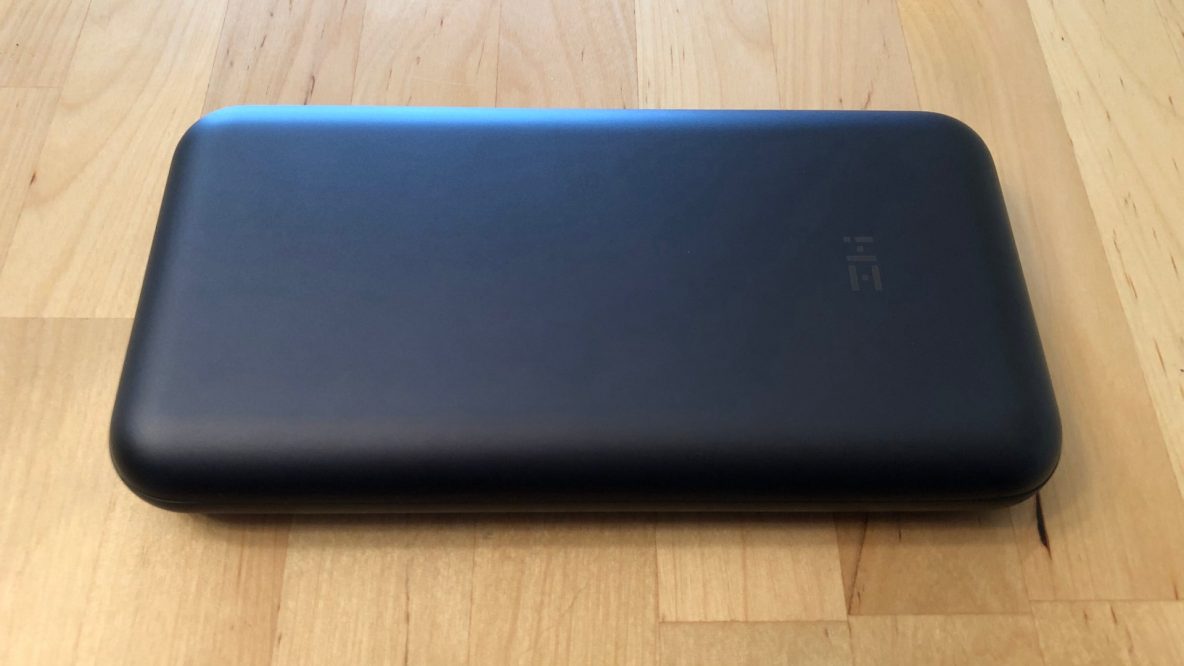 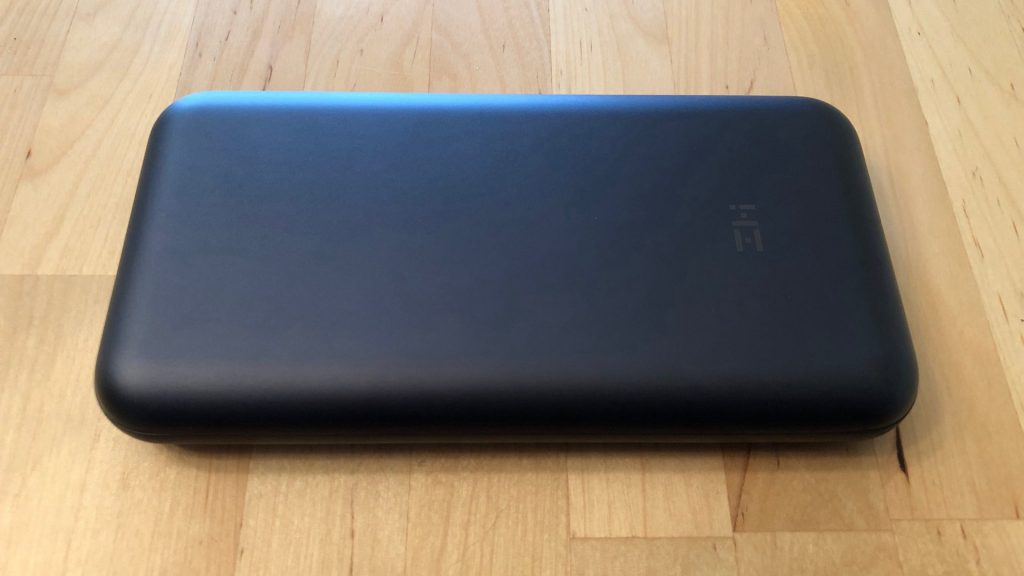 The ZMI PowerPack 20000 is a laptop friendly power bank with a USB hub function. Also good for iPhone and Android, tablets, Nintendo Switch, and up to 14-inch laptops. Includes cables and travel pouch. 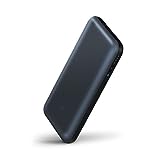 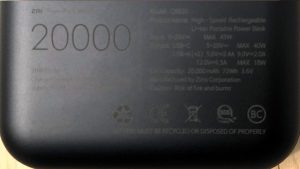 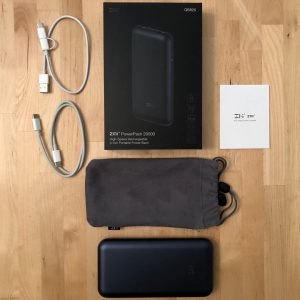 The ZMI PowerPack 20000 (aka ZMI QB820) has a good size and weight for its capacity and output. Curved edges on all sides make it comfortable to hold. And the included travel pouch, large enough for the power bank and cables, is a nice extra. Its output and USB hub function (details below) make it a nice choice for small to mid-sized USB-C laptops.

Using a Moto G6 for testing we see Quick Charge will fast charge over the USB-A port. Any QC supporting Android phone with USB-C can use the included micro-USB cable with a USB-C adapter. Or a regular USB-C to USB-A cable.

Quick Charge is also offered on the USB-C port. But the Moto only does normal charging. This is typical of Motorola phones when QC is offered over USB-C. Samsung Galaxy, LG, and other QC supporting Android phones would be expected to fast charge.

The Nintendo Switch charges at its max rate, up to 18W. It’ll fast charge while you play. Its charge rate while sleeping is also normal. This charger can also power the Switch’s dock.

Using a 13-inch MacBook Pro for testing we can draw up to 41W from this charger. That’s expected, after accounting for efficiency loss. But it is operating at 15V when normally we would expect 20V. This is likely due to 20V only offering up to 40W. The MBP is using the 15V profile to be able to draw more power. Different laptops may behave differently. You cannot force the power to draw to either 15V or 20V.

Different model laptops have different power demands. But in general, a 45W charger can support 12-inch, 13-inch, and 14-inch laptops. It can power a larger laptop in a pinch. It will charge while sleeping. But may only extend runtime if used while the larger laptop is active.

The USB hub function in the ZMI PowerPack 20000 allows you to use the power bank to connect USB-A devices to your USB-C laptop. This is normally done using a separate USB-C to USB-A adapter.

With some power banks, you push a button to get the LED indicators (aka fuel gauge) to light up. With ZMI power banks the button performs a reset of the power bank. This does light up the LEDs. But if the power bank is active (input or output) it will briefly interrupt the power flow as well. Power does reconnect on its own. And like a computer the occasional reset is good. So there’s no problem pushing the button. But with how ZMI LED’s behavior there shouldn’t be a need to push while in use.

When a ZMI power bank is charging a device the LEDs flash together. As its battery level drops, so does the number of flashing LEDs. So four blinking LEDs mean 75-100% capacity remaining. While three flashing LEDs mean 50-75% capacity. And so forth in 25% increments. The flashing continues so long as the power bank is charging a device. Or until it is completely drained. So there is no need to do anything to check its status while active.

While charging a ZMI power bank the LEDs do a combination of solid on and flashing. The combination indicates the current charge level. When completely drained only one LED will be flashing, with the rest unlit. After 25% recharged one LED will be solid, while another will start flashing. This continues at 25% increments. Until all four LEDs are solid, indicator a full charge. The LEDs will remain solid so long as the power bank stays connected to the charger. So again there is no need to do anything to check its status.

When the power bank is not connected to anything you’ll push the button to check its capacity. Again, this performs a reset on the power bank. But there’s no harm in doing so.

As a general rule, it is safe to use a USB-C to micro-USB adapter. That is an adapter that turns a micro-USB connection into a USB-C connection. That’s the type of adapter included with this charger’s micro-USB cable.

It is not safe to use the opposite, turning a USB-C connection into a micro-USB connection. That would allow for connections against the USB standards. And is potentially dangerous to devices.

My USB tester showed the micro-USB cable with a USB-C adapter that includes a 56k Ohm resistor. That resistor is required under USB-C specs for all USB-C to USB-A cables.

The cable charged my Moto G6 at the same rate as a regular USB-C to USB-A cable.

The presence of Quick Charge and other fast charging standards over USB-C is against USB-C specifications. Such chargers have been around for years without issue. But we don’t know what the future holds.

There is no known risk with running proprietary charging standards over USB-C. Manipulating the data lines does disrupt data transfers. But when plugging into a wall charger or power bank there is no data transfer anyway. A few USB-C engineers warn against using any USB-C chargers with third party standards. Their concern is unforeseen consequences. Future technology may prove to be incompatible with such configurations. And pulling out a charger several years from now with a new device could have a bad result.

The ZMI PowerPack 20000 is a personal favorite for when I travel with a laptop. I added a Lightning cable to the pouch and it has everything I need to charge all my devices on the go. My wife actually uses it more, as she has more work trips. Its 20,000mAh capacity allows it to come in a reasonable size and weight. And it is less likely to run into international travel restrictions.

The Nintendo Switch charges in handheld mode as fast as any other option. And it can even power a docked Switch.

Its 40-45W output works well for small USB-C devices on up to a 13-inch laptop. Phones and tablets that support USB Power Delivery can fast charge via USB-C.

Quick Charge 3.0 is available on all three ports. As is Samsung Adaptive Fast Charging and Huawei FCP. I would expect Samsung phones to charge as fast as possible. Huawei FCP phones will see lower current than with their included charger.

As is typical of many power banks you can’t use both USB PD and Quick Charge together. The total output only supports one fast charging tech at a time.

The USB hub function allows you to use the power bank a USB-C to USB-A adapter. It is always nice to carry one less adapter these days.

Keep in mind the button is for resetting the power bank. Which will briefly interrupt the power flow. As the LED indicators stay on while in use or charging you shouldn’t need to push it unless correcting an issue. Or checking its power level when not in use.

The ZMI PowerPack 20000 is a great all-in-one solution power bank. By adding a Lightning cable I can fast-charge an iPhone, most Android phones, and Nintendo Switch on the go. Not to mention my MacBook Pro and small accessories. Not bad for the contents of a 1 pound pouch.

You’ll want a USB-C wall charger to quickly recharge this USB-C power bank. I recommend the ZMI PowerPlug Turbo. Its 45W USB-C PD is perfect for this power bank.