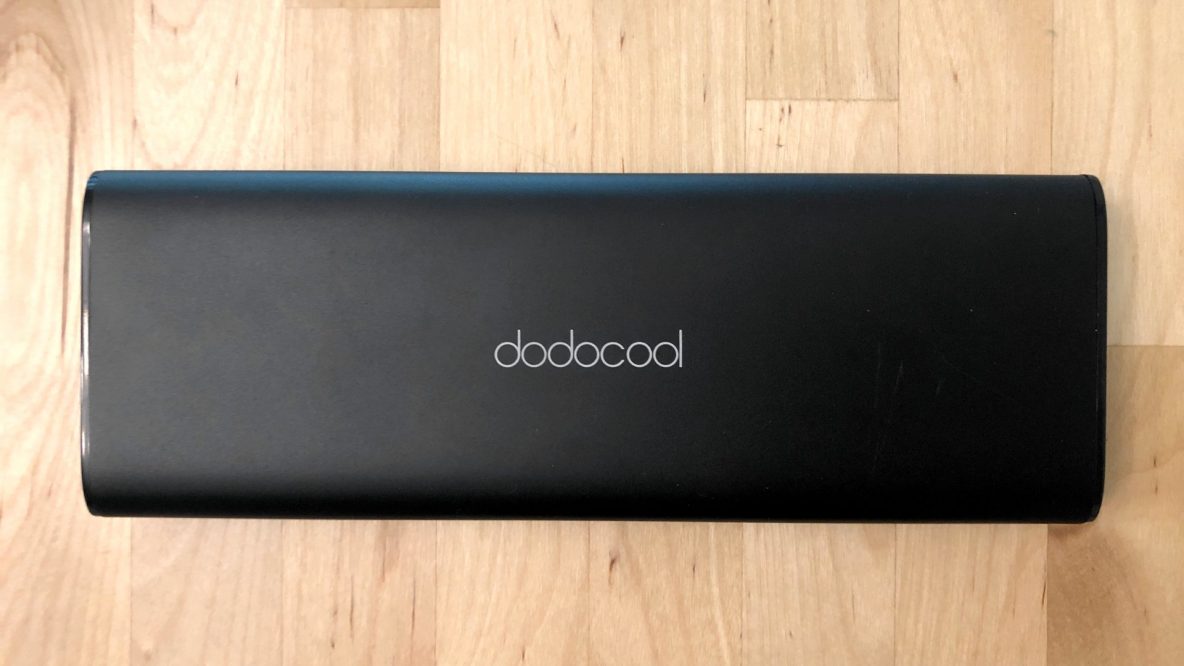 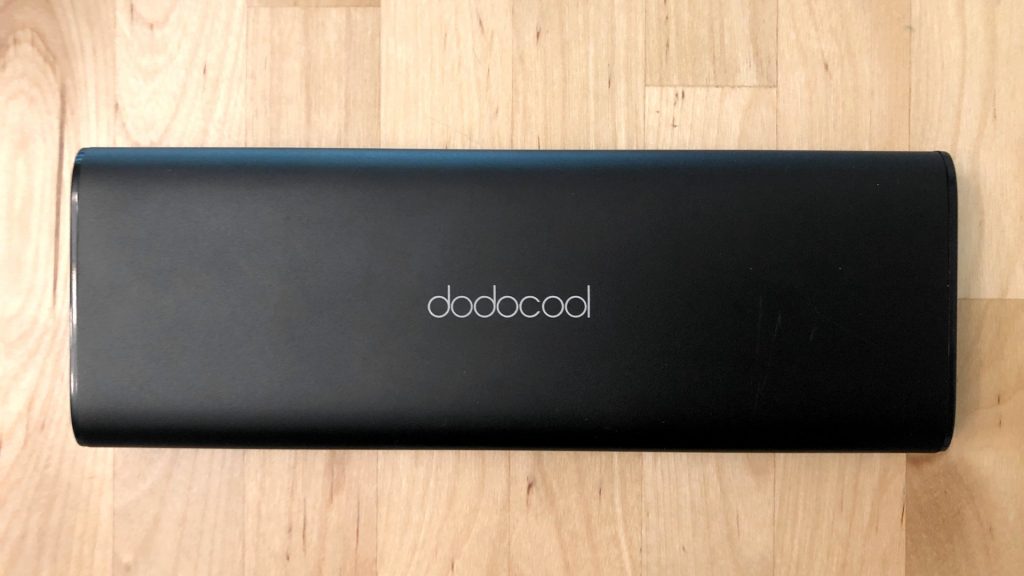 The dodocool 20100 45W Type-C PD is 45W USB-C PD power bank with an aluminum enclosure. Making it a bit heavier, but also cooler. It also has some odd power profile specs you should read about before buying.

Disclosure: As an Amazon Associate I earn from qualifying purchases. dodocool provided the product in this review. 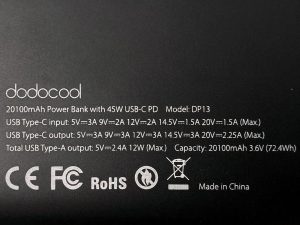 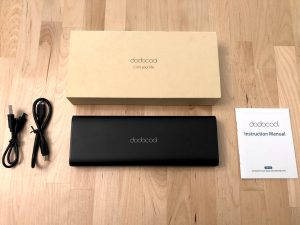 The dodocool 20100 45W Type-C PD is slimmer that other 45W USB-C PD power banks. dodocool opted for a longer form factor to keep the width and thickness down. Its aluminum alloy enclosure may of also played a part in that design decision. The metal enclosure keeps the power bank cool to the touch, even when in use. It adds a few more ounces. But you can’t argue with the temperature control. Besides the ports, its power check button and LED indicator are also on the front plate. You’ll need to look at it straight on to access and see its remaining power level.

Using a Moto G6 for testing we confirm no Quick Charge support. So no fast charging for QC supporting Android phones. And those that mimic Quick Charge.

Either USB-C or USB-A port will support regular charge of most Android phones.

The Nintendo Switch charges at its max rate, up to 18W. It’ll fast charge while you play. Its charge rate while sleeping is also normal.

One oddity is the voltage reading while gaming. See how the yellow line is thicker there than in the other power meter shots? That is fluctuations in the voltage. The up/down variance isn’t big, but it is more than we normally see.

This charger can also power the Switch’s dock.

Using a 13-inch MacBook Pro for testing we can draw up to 41.5W from this charger. That’s expected, after accounting for efficiency loss.

Different model laptops have different power demands. But in general a 45W charger can support 12-inch, 13-inch, and 14-inch laptops. It can power a larger laptop in a pinch. It will charge while sleeping. But may only extend runtime if used while the larger laptop is active.

That said, the usage of 14.5V instead of 15V will cause some compatibility issues. dodocool states some Google Chromebook Pixel and HP Spectre models aren’t supported. If your laptop can draw from 20V then there shouldn’t be an issue.

14.5V is not allowed under USB Power Delivery 2.0, which this power bank uses. So its presence is a violation of USB-C specs. For many devices it won’t be an issue. But it can be with some.

14.5V was allowed under USB Power Delivery 1.0. Most because Apple and other USB-IF members already had 14.5V chargers on the market. Most notably the Apple 29W USB-C Power Adapter. But it was removed with USB PD 2.0.

With phones and most tablets it is a non-issue. They don’t go past 9V.

With the Nintendo Switch it does get charged at 14.5V. Here’s a side-by-side comparison between the dodocool and a Nintendo licensed power bank.

As you can see, the power draw was similar between both power banks. Any differences can be account for with the normal variation of charging an active device.

Older HP Specte were known to prefer HP chargers over others. But the Chromebook Pixel was accepting of third party chargers.

Freelance hardware engineer Nathan K put out a warning on the matter. The original post was on Google+ and so is now lost to us. But one of his readers informed him that they used the power bank with their Pixelbook. “As a result, it is non-functional.” It isn’t clear if the laptop or power bank become non-functional. The affected user wasn’t able to run tests, and Nathan K never did any testing. The incompatible listing was present at the time of Nathan’s post. Nathan K points out that had it followed strict USB-C PD standards this wouldn’t be the case.

The dodocool power bank worked fine with my Nintendo Switch at 14.5V. And my MacBook Pro at 20V. Other laptops that prefer 15V may or may not have issues.

The dodocool power bank also has abnormalities with its support input power profiles.

dodocool’s documentation says to use USB-C PD chargers rated 30W or more. They recommend their own charger, Apple’s 29W/61W/87W chargers, and a few other laptop chargers. Basically, a charger that supports 20V/1.5A. If you charge it at a different voltage it under performs.

With the Google 18W USB-C power adapter it should be close to 18W. Even with its reduced 9V/2A specs.

Be sure you have a 30W (or faster) USB-C charger available to recharge this power bank in good time.

The dodocool 20100 45W Type-C PD performs the same as other 45W power banks for most devices. If your laptop charges at 20V then there’s no issue. But you’ll want to use a 30W or faster USB-C PD wall charger to recharge it. Or allow it to charge overnight.
For iPhone and Google Pixel you’ll get fast charging. But most other Android phones it is only regular charging speed. On either USB-C or USB-A ports. 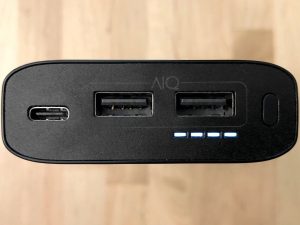 For the Nintendo Switch it charges in handheld mode as fast as any other option. And can power a docked Switch.

Do not use this with a Google Chromebook Pixel or HP Spectre laptop. As detailed above, dodocool lists them as being incompatible. Likewise, be aware of its 14.5V output/input instead of the standard 15V. It didn’t cause any problems or reduced performance in my testing. And it isn’t the first USB-C PD charger with that voltage offering. But it is against USB-C specs.

It can charge two devices at once, using USB-C and USB-A. The two USB-A ports share the same 2.4A. Which limits what devices you can charge efficiently on those ports alone.

Its aluminum alloy casing adds some weight. But the power bank was always cool to the touch while in use. I was able to raise it to room temperature by charging both the Switch and a phone. Other power banks get closer to 120°F (49°C), which is warm to the touch.

dodocool has U.S. based support (email, phone) and warranty service.

The dodocool 20100 45W Type-C PD has a slimmer profile and better cooling among 45W power banks. But its power profiles are outside of the norm and worth reviewing before you buy.