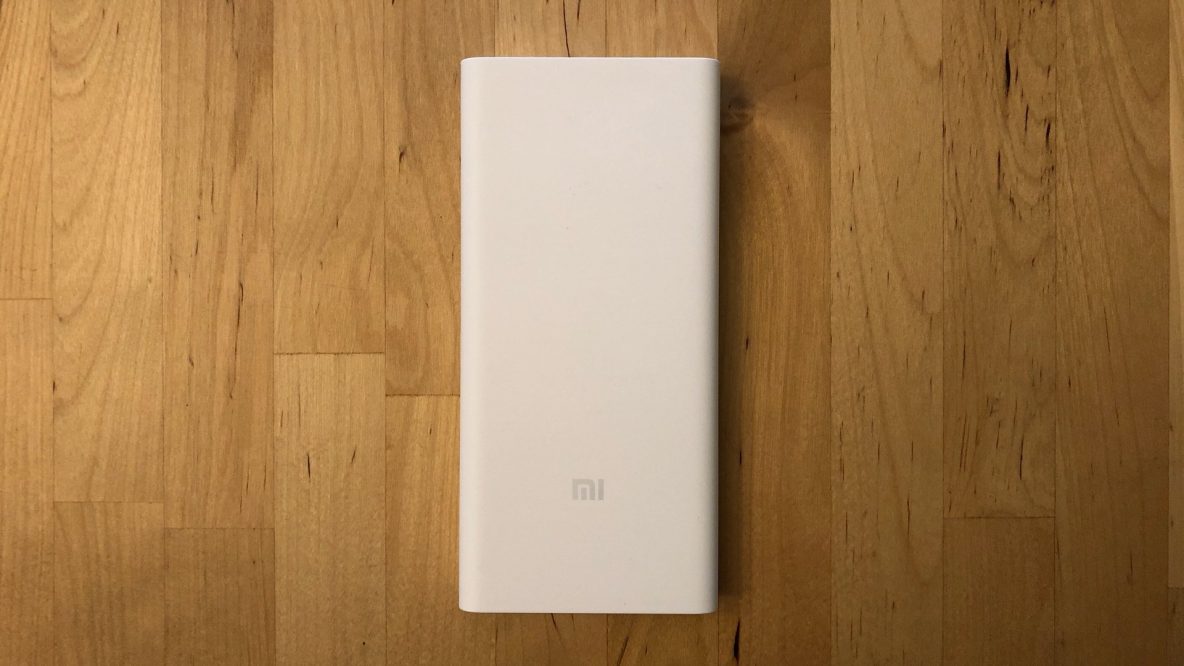 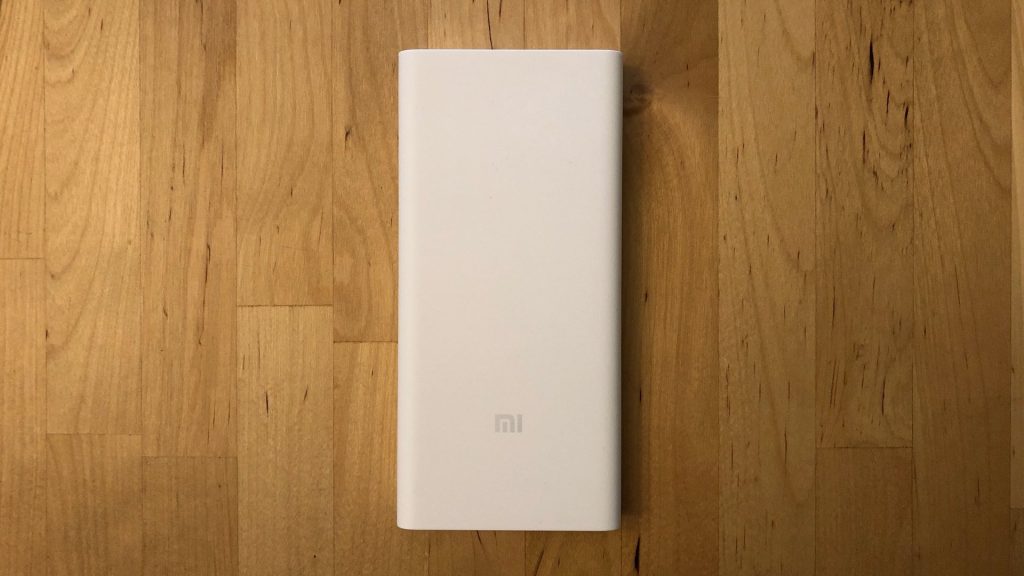 The Xiaomi Mi 10000 Wireless power bank offers Qi wireless charging. As well as Quick Charge 3.0 output via its USB-A port. But its USB-C port is input only. With no support for USB Power Delivery, in or out.

Disclosure: As a Banggood associate I earn from qualifying purchases. Banggood provided the product in this review. 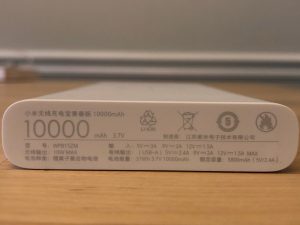 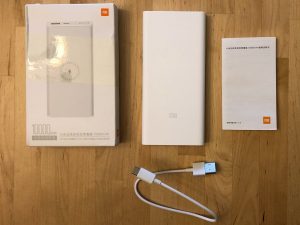 The Xiaomi 10000 Wireless is a bit larger than other 10,000mAh power banks. To accommodate the Qi charging coils. Which allows for wireless charging along one side. The wireless pad is a different shade of white. With a different texture. And a lightning bolt symbol, just in case you still weren’t sure which side to use. Otherwise, its exterior is much like other power banks. With the ports, power button, and LED indicators all on the same side.

Its length and width feel good with a smartphone connected for wireless charging. It is more than enough surface area to hold my iPhone 8. And larger model phones won’t have too much weight over the sides. For the cost of more bag space, the phone gets better stability.

Quick Charge 4+ phones will also see fast charging on the USB-A port. Thanks to their backward compatibility.

With no USB-C output, this is not an ideal power bank for the Nintendo Switch. Its USB-A port and USB-C to USB-A cable does provide a charge in handheld/tabletop mode.

To activate wireless charging press the power button, then place your device on the charging pad. The side with a lightning bolt symbol. If the USB port is already charging another device then you don’t need to push the button.

Officially 10W is the output limit of the power bank’s Qi wireless charger. But my testing showed it can get over 12W if the phone allows.

A 10W wireless charger will take about an hour less time than a 5W wireless charger. And will outperform a 5W USB charger, like the iPhone’s. Most phones will get a faster charge using a fast-charging wired option over wireless.

The benefit of wireless charging is convenience. You don’t need an extra cable. Holding the phone and power bank together you can continue to use it. And you don’t need to plug/unplug it.

I was about to get ~16W total output when testing with two devices. A Quick Charge device on the USB-A port is favored, receiving 9-10W of that total output.

This limitation is typical of most power banks. The few I’ve seen which allow for two fast-charging devices are unusually large. There is a limit to how much current can cross its circuits without extra hardware. Which adds size, weight, and cost.

Most smaller devices will revert to their normal charging rate. Which will continue to charge the battery while they are in use. The total charge time for the two devices is about the same. Whether you fast charge them one at a time. Or charged them at a slower rate together.

While it supports outputting to two devices it lowers the power to each device. More so than pass-through charging typically does. With only the USB-A port or wireless pad engaged during a pass-through charging, the device gets ~4.5W. But with both connected the two devices share. In either setup, the power bank draws more power than it outputs. So either setup is sustainable through the night. 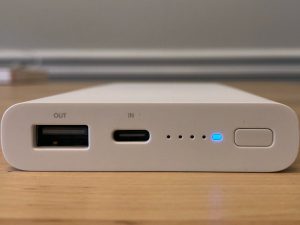 The Xiaomi Mi 10000 Wireless was made with Xiaomi’s phones in mind. But designed to be compatible with many other brands and models, too. Something we don’t see with Apple and some other larger brands.

iPhones can fast-charge over the USB-A port using the older Apple 2.4A standard. About 15 minutes slower than a USB-C PD power bank. But good enough for most cases.

Samsung Galaxy, Motorola, and other Androids will also fast charge via the USB-A port. Provided they support Quick Charge.

This is not an ideal charger for the Nintendo Switch. It draws less power from USB-A than USB-C. It can work in a pinch. Providing a slow charge while you play at best. And slowing down the battery drain at worst. But I wouldn’t recommend this power bank strictly for charging a Switch on the go.

The real reason to consider this power bank is the built-in Qi wireless charger. Which offers up to 10W to compatible phones and devices. With wireless, you can skip the cable and charge with a simple push of a button and the placement of your phone. But if you’re not interested in wireless the feature adds bulk and weight. So you may prefer a slimmer option.

Likewise, if you’re looking for a USB-C PD power bank this is not the one for you. USB Power Delivery is not supported. So newer iPhones and Google Pixel are not ideal phones. But most other Androids support Quick Charge or compatible tech. And a Quick Charge wall charger will fast charge this power bank.

Be aware the included user manual is entirely in Chinese. But the power bank’s functions are standard. And any other details you may need have been covered in this review.

Xiaomi has U.S. based support (web, chat, email, phone). They are a large and well respected Chinese electronics company, most known in the USA for their smartphones and laptops. They helped found ZMI, their USA mobile power brand.

Banggood is a Chinese e-commerce retailer that focuses on gadgets and electronics. They ship worldwide, with warehouses in Australia, Europe, Hong Kong, and the United States. They receive significant traffic from the USA. But are better known in other countries. Shipping to the USA is free for orders of $50 or more. But takes 7-20 business days if not in a regional warehouse. Closer countries usually see faster shipping.

Banggood’s reps are aware of how Chinese retailers are viewed. And they are realistic about the challenges they all face. They have recommended using PayPal over a credit card for the added security and want customers to understand the longer ship times before they order.

The Xiaomi Mi 10000 Wireless offers both convenience and fast charging. To iPhones and Androids with Quick Charge support. Lack of USB-C output makes it less ideal if you have several different USB-C devices. But if your needs fit its offerings it is a good match at a good price.