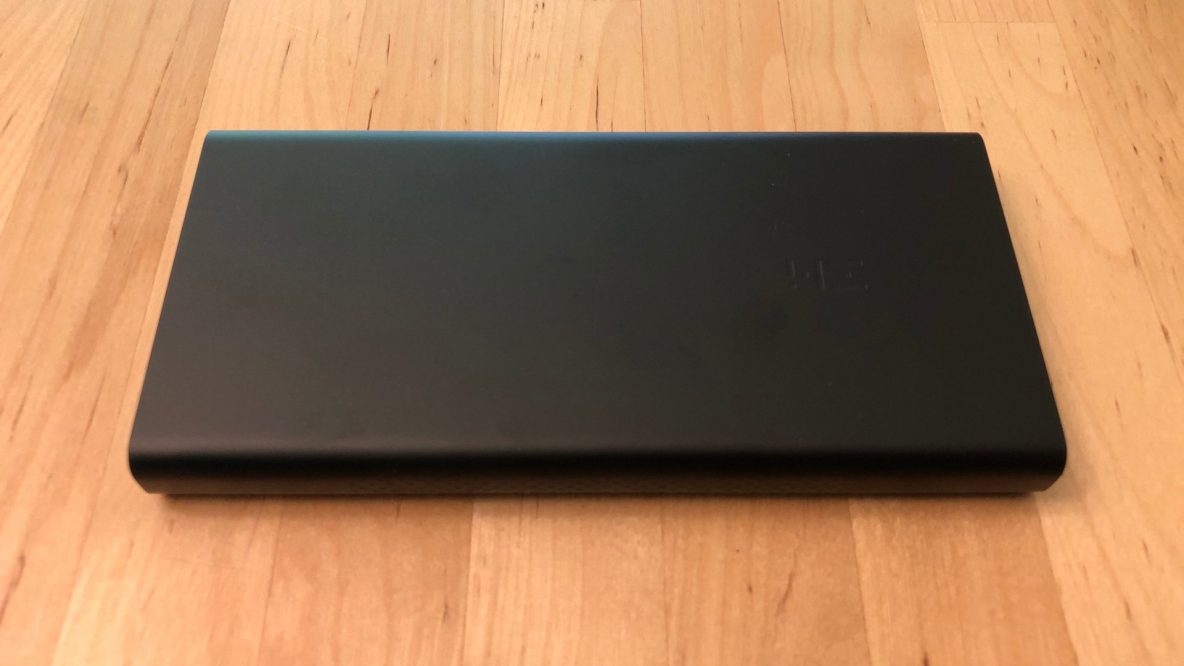 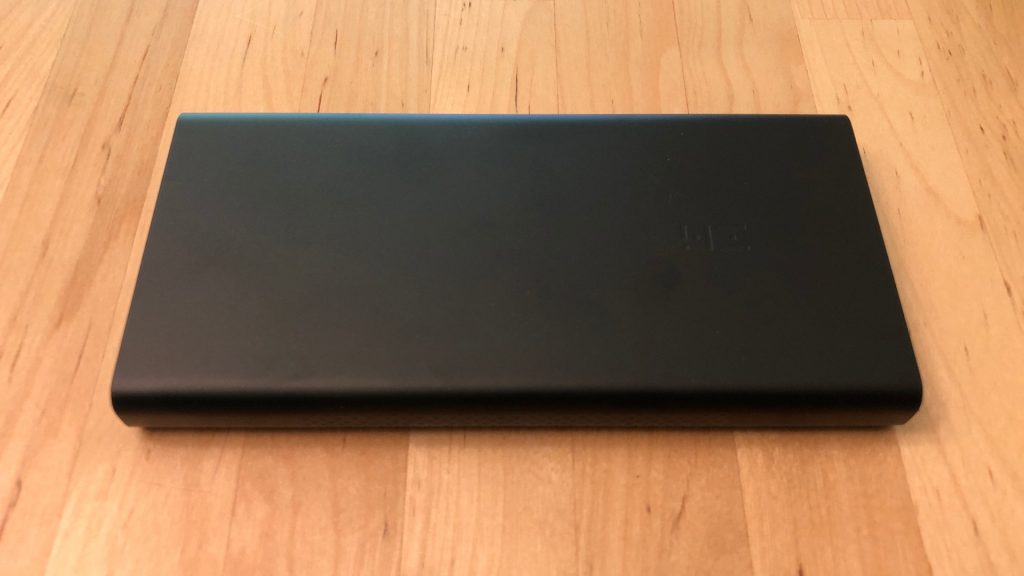 The ZMI PowerPack Ambi 10K Dual USB-C offers two USB-C ports, and no legacy ports. This allows for a slimmer design. And functions we haven’t seen before with a power bank at this price level. 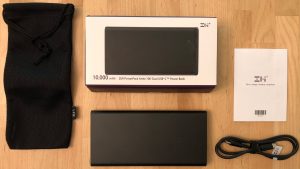 The ZMI PowerPack Ambi 10K Dual USB-C (aka ZMI QB812) is what many USB-C early adopters want in a power bank. It gives up legacy USB ports to make room for functionality that works best with a dual USB-C setup. The power bank isn’t any thinner or smaller than its peers with USB-C and USB-A. But is offers superior performance for pass through charging or as a UPS.

The enclosure is aluminum. Which helps with the heat usually generated by pass through charging setups. There are bumps along the sides to help provide a better grip. The front panel hosts the two USB-C ports, 4 LED indicators, and a reset button. The LEDs stay on whenever the power bank is in use. One USB-C cable is included. But you’ll need a second cable to take advantage of both USB-C ports.

If two phones are connected fast charging isn’t available. Each phone will get up to 10W instead.

Using a Moto G6 for testing we get normal charging rates. As no Quick Charge or compatible fast charging standard is supported that’s as fast as it goes. Still, 9-10W is a decent charge rate.

The updated Nintendo Switch charges at 16W, near its max power draw of 18W. Plenty to fast charge while you play.

The original Nintendo Switch charges a bit slower at around 14W. This is due to a shortcoming with the original Switch itself. That 14W is still more than enough to charge while you play.

Pass through charging is useful when you only have one USB wall charger. I don’t recommend using the feature on a regular basis. It puts more heat and stress on the portable charger. Which will affect its lifespan. But in this case it is less of an issue, as there aren’t any inefficiencies when charging as with most other power banks.

So if you’re looking for a pass through capable power bank this is the one I would recommend. The charge performance on both ends is superior to anything else I’ve tested.

Besides pass through charging this power bank can also act as a UPS. Otherwise known as an uninterruptible power supply. In short, it can be a battery backup for USB-C devices that don’t need more than 18W.

With pass through charging there is an interruption of power if the wall charger stops. When recharging your phone overnight it isn’t a big deal. But for a device without an internal battery it results in a shutdown. With a UPS there is no power blip. And so the device continues to operate.

In testing I connected ZMI’s power bank to a USB-C PD wall charger. Then to a phone. And I monitored the phone’s power draw. I then turned off the USB-C PD wall charger. The power meter showed no interruption. And the phone itself showed continuing charging. The ZMI power bank’s LED indicators changed from charging (blinking) to discharging (solid). The ZMI power bank began charging again when I turned the wall charger back on. And the phone continued to show no interruption to its own power draw.

One thing to note is the button on the front panel of the power bank. It is not a fuel gauge button, it is a reset button. Pushing it will display the LEDs which shows current power levels. But it also resets the power bank. Which interrupts power input and output. Those connections will come back online. But if connected to a device without its own battery it will result in a shutdown.

This setup would be useful for a new Raspberry Pi 4, which uses USB-C PD for power. It would also work with a USB-C powered Wi-Fi router or security camera. It is about the same price as a small, dedicated UPS. But much smaller.

With some power banks you push a button to get the LED indicators (aka fuel gauge) to light up. With ZMI power banks the button performs a reset of the power bank. This does light up the LEDs. But if the power bank is active (input or output) it will briefly interrupt the power flow as well. Power does reconnect on its own. And like a computer the occasional reset is good. So there’s no problem pushing the button. But with how ZMI LED’s behavior there shouldn’t be a need to push while in use.

When a ZMI power bank is charging a device the LEDs flash together. As its battery level drops, so do the number of flashing LEDs. So four blinking LEDs mean 75-100% capacity remaining. While three flashing LEDs mean 50-75% capacity. And so fourth in 25% increments. The flashing continues so long as the power bank is charging a device. Or until it is completely drained. So there is no need to do anything to check its status while active.

While charging a ZMI power bank the LEDs do a combination of solid on and flashing. The combination indicates current charge level. When completely drained only one LED will be flashing, with the rest unlit. After 25% recharged one LED will be solid, while another will start flashing. This continues at 25% increments. Until all four LEDs are solid, indicator a full charge. The LEDs will remain solid so long as the power bank stays connected to the charger. So again there is no need to do anything to check its status.

When the power bank is not connected to anything you’ll push the button to check its capacity. Again, this performs a reset on the power bank. But there’s no harm in doing so. 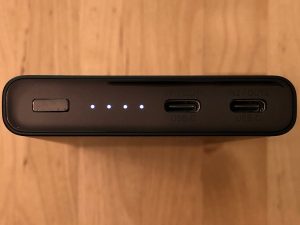 The ZMI PowerPack Ambi 10K Dual USB-C is what many would consider a modern power bank in a USB-C world. It forgoes older USB ports and takes advantage of what USB-C can do as an input/output port. Either USB-C port will charge a device. And either USB-C port can recharge the power bank.

For phones it fast charges iPhone 8/X/XR/XS, Samsung Galaxy, and Google Pixel. Lack of Quick Charge means no fast charging for many other Android phones. But it will charge them at their normal rate.

For the Nintendo Switch it charges in handheld mode while you play. Due to their designs it is more efficient with a newer model Switch than an original model. But still enough to charge any Switch with the most demanding games.

Keep in mind the button is for resetting the power bank. Which will briefly interrupt the power flow. If charging a device with a battery the connection comes back on its own, so it isn’t a big deal. But if the power bank is acting as a UPS for a device without a battery it would result in a shutdown. As the LED indicators stay on while in use or charging you shouldn’t need to push it unless correcting an issue. Or checking its power level when not in use.

Its pricing is higher than other 18W USB-C PD power banks. But it is offering functions those others don’t. Dual USB-C, a metal enclosure, faster pass through charging, and UPS functionality. Not to mention is includes a USB-C cable, worth $7-10.

ZMI USA has U.S. based support (web, email, phone) and a 18 month warranty. They were founded in the USA and are backed financially by Zimi Corporation. Zimi is the exclusive mobile power accessory supplier to Xiaomi.

The ZMI PowerPack Ambi 10K Dual USB-C is a solid early step into the market of USB-C only power banks. Its output makes it better for phones and smaller devices. Rather than laptops and larger devices. But it leverages its dual USB-C setup to provide better pass through charging. And a rare UPS functionality.

You’ll want a USB-C wall charger to quickly recharge this USB-C power bank. I recommend the ZMI PowerPlug Turbo if you want to keep the same brand with your wall charger. Otherwise check out the AUKEY PA-Y18 18W PD as a more compact option.