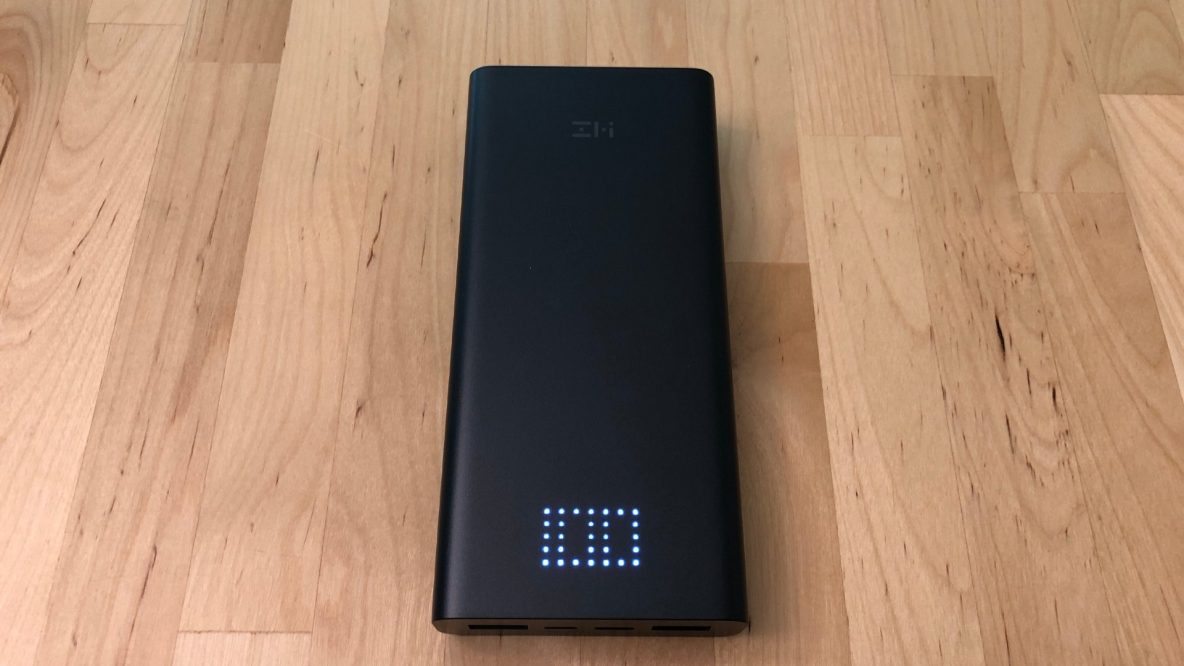 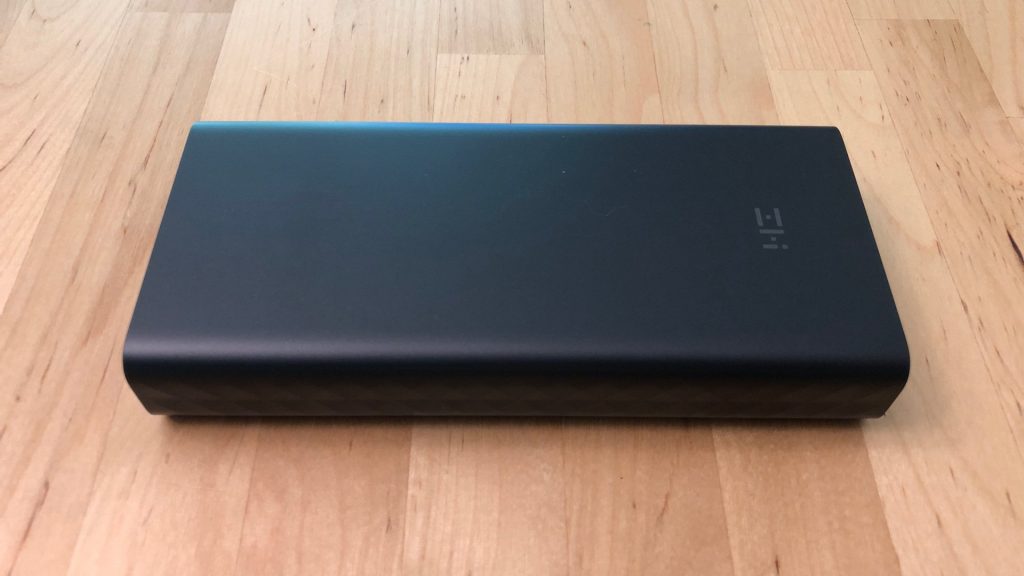 The ZMI PowerPack Aura 20K USB-C is one of the least expensive 20,000mAh USB-C PD power banks you’ll find. And stands out from the crowd with a unique LED matrix display. Which shows numbers and animations. 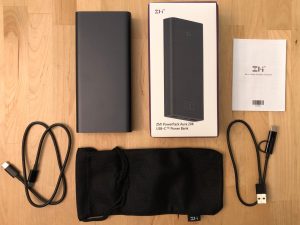 The ZMI PowerPack Aura 20K USB-C (aka ZMI QB822) is a solidly built power bank with the usual form factor for its specs. It manages to be on the lighter side of ~30W USB-C power banks. The sides have anti-slip grooves from top to bottom. Offering a better grip than smooth plastic or metal. The front panel hosts the four USB ports (USB-C, USB-A x2, and micro-USB). 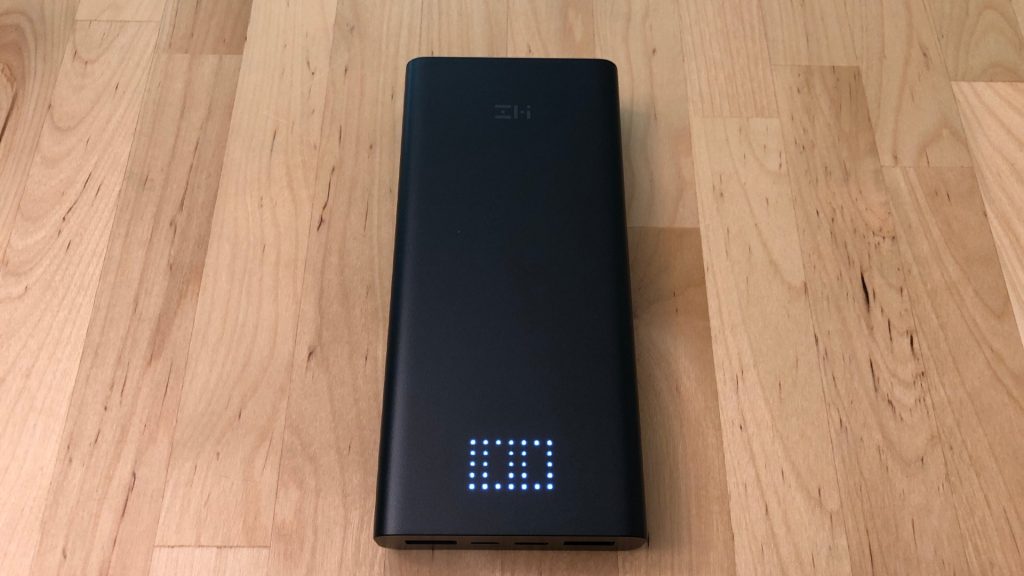 But its stand out visual feature is the LED matrix display on the top. Usually, with LEDs on power banks, we get a few to show a fuel gauge estimate. With this matrix display, it shows numbers. Point the USB ports toward you to see them right side up. On top of that ZMI included a couple of neat animations. When you connect to a device an arrow points down, indicating power output. When you connect to a charger an arrow points up, indicating power input.

Quick Charge is also available over the USB-C port. Motorola phones can’t use QC over USB-C. But other QC supporting Android phones would be expected to fast charge via USB-C as well as USB-A.

The Nintendo Switch charges at its max rate, up to 18W. It’ll fast charge while you play. Its charge rate while sleeping is normal. But it won’t power a docked Switch. That requires a 15V output which this power bank doesn’t offer.

Using a 13-inch MacBook Pro for testing we can draw up to 24W from this charger. That’s expected, after accounting for efficiency loss.

The ZMI QB822 can provide almost 30W of output. Which is enough to meet the needs of a newer Apple MacBook Air. Or most other 12-inch laptops. But in my test the MacBook Pro connected using 12V, not 15V. This is likely due to 12V supporting higher output. Its 12V/2.25A offers up to 27W. While its 15V/1.5A offers up to 22.5W. During power negotiation, the MacBook detected this and opted for the higher wattage.

Other Apple laptops will do the same and will accept the 12V connection. But not every PC laptop can say the same. Some need 15V or 20V. In those cases, they will draw less power.

If buying this power bank to use with your Windows laptop check its power input specs. If it supports 12V you should have no problems. Provided your laptop came with a 30W charger.

The USB-C and both USB-A ports all support several fast charging techs. But they cannot all fast charge devices at the same time. In fact, if you want to fast charge you can only connect one device at a time.

When two or more devices have connected the output of all ports drops. All fast charging tech except for Apple 2.4A is disable. And their power profiles drop to 5V only. With the USB-C port outputting 10-15W. And the USB-A ports outputting up to 12W. That still provides a normal charge for a phone, regular tablet, or Nintendo Switch. But you won’t get a 0-50% in 30 minute charge time.

This is not uncommon with cheaper 20,000mAh power banks. Most 18W USB-C models have the same limitation. As do similarly priced 30W USB-C models. It is a compromise between cost and performance. And in this case, ZMI opted for a lower price without sacrificing build quality.

The power input specs of the ZMI QB822 state it can recharge itself up to 30W. But in my testing, I didn’t see it get that high. I also saw it was picky with its power profile selection. Though it does support all the power profiles listed in its specs.

I measured the actual input of the power bank at ~20W. This gives it a recharge time of 5-5.5 hours, assuming it is at 0%. Not bad, but less than the spec indicates. And so you can use up the power bank’s charge much faster than you can replenish it.

If you plan to charge overnight none of this should be a problem. The power bank will be back at 100% before you wake up. But if you need to top off mid-day be away from its limitations.

In any configuration, the output is limited to 5V/1A (5W). That’s enough to charge a phone or small device overnight. But nowhere near the fast charging offered when the portable charger is only plugged into one device. Input is also limited to 5V, so no fast charging for the power bank either.

It is also worth noting the USB-C port and micro-USB port are close to one another. I was able to plug them in together. But cable ends were bumping against one another.

As a general rule, it is safe to use a USB-C to micro-USB adapter. That is an adapter that turns a micro-USB connection into a USB-C connection. That’s the type of adapter ZMI included with this portable charger.

It is not safe to use the opposite, turning a USB-C connection into a micro-USB connection. That would allow for connections against the USB standards. And is potentially dangerous to devices.

My USB tester showed the micro-USB cable with a USB-C adapter that includes a 56k Ohm resistor. That resistor is required under USB-C specs for all USB-C to USB-A cables.

The cable charged my Moto G6 at the same rate as a regular USB-C to USB-A cable.

The presence of Quick Charge over USB-C is against USB-C specifications. Such portable chargers have been around for years without issue. But we don’t know what the future holds.

There is no known risk with running proprietary charging standards over USB-C. Manipulating the data lines does disrupt data transfers. But when plugging into a wall or portable charger there is no data transfer anyway. Some USB-C engineers warn against using any USB-C chargers with third party standards. Their concern is unforeseen consequences. Future technology may prove to be incompatible with such configurations. And pulling out a charger several years from now with a new device could have a bad result.

I have not run into any issues with these fast charging standards on this or any other charger. But as it is a spec violation I want you to be informed. If you’re a stickler for meeting USB-C specifications this isn’t a good portable charger for you. If you’re more pragmatic it works fine and has no known issues.

The ZMI PowerPack Aura 20K USB-C is a budget-friendly 20,000mAh power bank. Offering up to 27W USB-C for small to medium-sized devices. And Quick Charge and another fast charging tech for a variety of Android devices. All at a low price for its specs. The downside is it can only fast charge one device at a time. Though it will normally charge two devices satisfactorily.

For the Nintendo Switch, it charges in handheld mode as fast as any other option. But it cannot power a docked Switch. 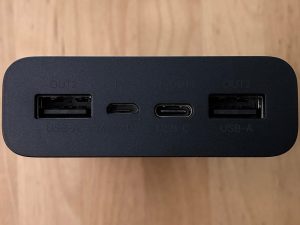 Its 27W max output is close enough to support a MacBook Air or 12-inch laptop. Apple laptops will accept the higher wattage 12V profile. Some PC laptops may only take 15V, in which case they’ll draw less power.

The LED matrix display shows you whole numbers instead of an estimated dot for the fuel gauge. And as a couple of cute animations to show power output or input. But it doesn’t stay lit up when in use. That’s good when trying to sleep in the same room. But to show the fuel gauge you’ll need to press the side button. Which is actually a reset button, not a display activator.

Pushing the reset button does light up the display when pushed. But it also interrupts power to and from the power bank. Charging of devices or the power bank resumes on its own, which may result in a chime from your device. Much like restarting a computer, it is healthy to reset it on occasion.

The ZMI PowerPack Aura 20K USB-C is a budget-friendly power bank. Offering fast charging for USB-C phones, tablets, the Nintendo Switch, and small laptops. Its LED matrix display is a neat frill. And the inclusion of a USB-C cable at this price point is always welcome.

You’ll want a USB-C wall charger to quickly recharge this USB-C power bank. I recommend the ZMI PowerPlug Turbo if you only need a single port charger. Or the ZMI zPower USB-C and Dual USB-A charger if you need multi-port support.