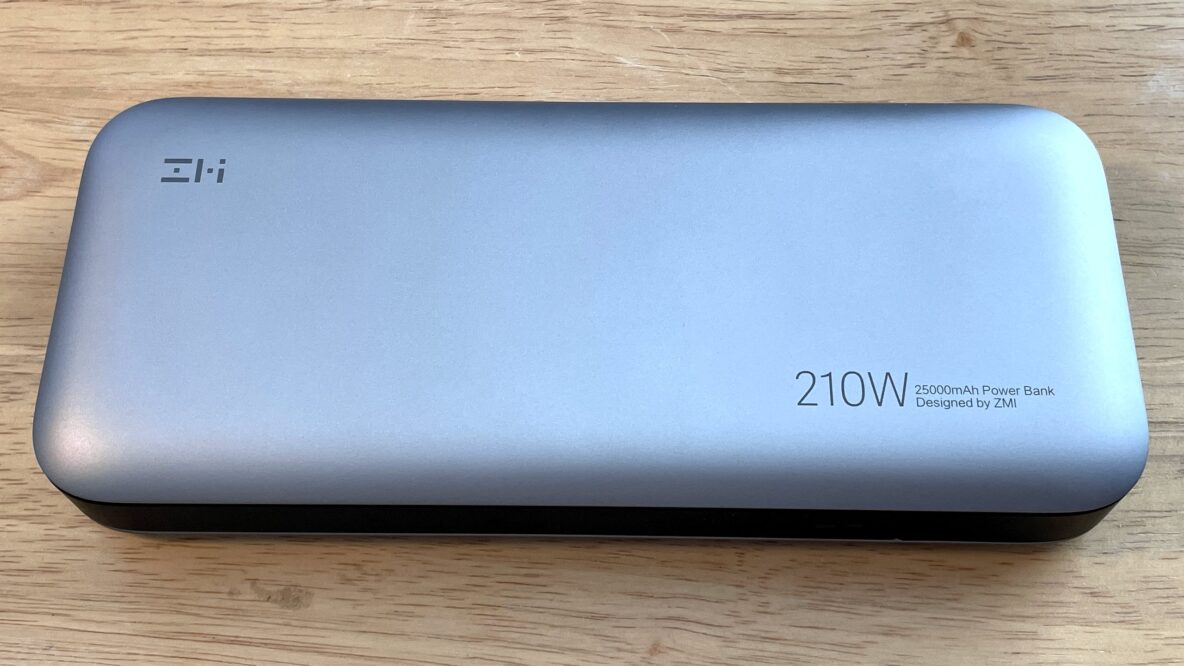 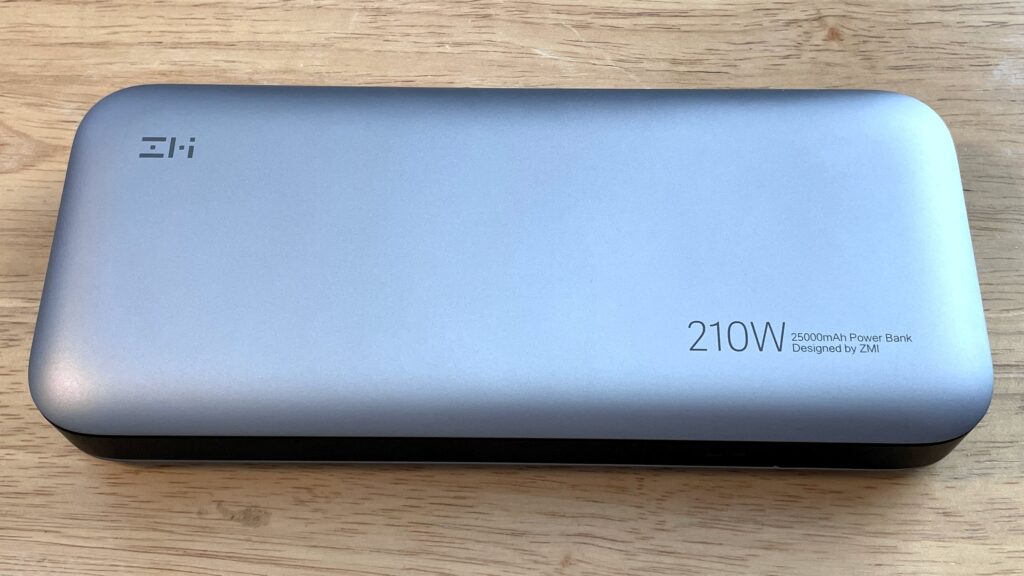 The ZMI PowerPack No 20 offers high output and high capacity mobile charging for any size USB-C device. In fact, it can charge two or three devices at once without much compromise. 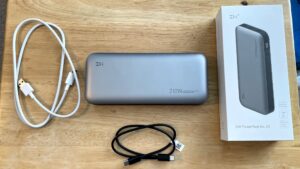 ZMI PowerPack No 20 box and contents

The ZMI PowerPack No 20 is an all-in-one portable charger for anyone with a range of USB-C devices. It fast charges my iPhone just as well as any size laptop, and all devices in between. Offering capacity over the more common 20,000mAh also allows it to support multiple devices better.

The included USB-C to USB-C cable supports 5A/100W and is short and flexible, which I prefer for travel. The Xiaomi USB-A to USB-C cable is a unique offering but requires you to trust a proprietary standard. All ports are on the same side, are labeled, and the USB-C ports are color-coded to help identify the 100W (orange) vs the 45W (black). The capacity display shows 1-100 clearly.

Using an iPhone 12 for testing, we find USB PD phones will fast charge over either USB-C port. iPhones will need to use a USB-C to Lightning cable, not included. Android phones can use the included USB-C to USB-C cable.

Using a Moto G6 for testing, we see Quick Charge fast charging over the USB-A port.

It also supports the Switch’s dock, providing enough power for video output to your TV.

Using a 13-inch MacBook Pro for testing, we can draw up to 56W from this charger. Expected after accounting for efficiency loss. That’s the max draw rate of my model laptop.

The 100W USB-C port will support up to a 16-inch laptop under any condition. 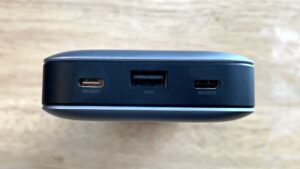 Aside from the 100W output option, the other big draw for this power bank is its multi-port output capabilities. It can support up to 210W total across up to three devices. Enough to charge three laptops, to say nothing of the mix of devices you travel with.

The two USB-C ports have their own power circuits, which allows them to keep their full output under all conditions. Many other chargers lower the USB-C output when both ports are in use. Here you’ll always get 100W and 45W.

The variable output is on the USB-A port, assuming you’re using the included Xiaomi USB-A to USB-C cable. If just the USB-A port is in use then it offers up to 100W output. But if either (or both) USB-C ports are in use then the USB-A output drops to 65W (20V/3.25A).

If you forgo the Xiaomi cable then you’ll get full output from each port under any condition. With the USB-A then good for Quick Charge fast charging or regular USB-A charging.

I hadn’t heard of this cable until I received ZMI’s power bank. The cable and a proprietary 120W charger are included with the Xiaomi Mi 10 Ultimate/Memorabilia edition. Together they charge the phone’s 4,500mAh battery in 23 minutes. The cable is actually rated for 6A, but with ZMI’s power bank it can only go up to 5A.

Xiaomi made extensive extensions to the USB-A end of this cable. It has CC pins, like a USB-C connector. CC pins are used to establish and manage the connection between the source (charger) and sink (device) with USB-C cables. It is compatible with E-Mark, the system USB PD uses to identify greater than 60W power capabilities between charger and device. Similar changes were made to the USB-A port on ZMI’s power bank, to make it fully compatible with Xiaomi’s cable.

Together the cable and power bank’s USB-A port supports a proprietary superset of USB Power Delivery and Quick Charge. Up to 100W by itself, or up to 65W when either of the USB-C ports is in use.

Whether you use the cable or not is up to you. It is a proprietary setup from Xiaomi made for their own phone. My testing showed no indications it wouldn’t function as a third USB PD port, but neither did I do in-depth testing. If you normally shy away from non-standard protocols then you can just not use the cable. The USB-A port on the power bank reports as a typical Quick Charge 3.0 port with any standard USB-A cable.

At or near 100W or more output the power bank will heat up and it could reach a point where it throttles the output to prevent an overheat situation. This is typical of high output power banks and should be considered good, as it means proper safety protocols are in place. Though it will feel more annoying than anything at the time.

If charging one laptop this likely won’t come up, as the laptop will reduce its power draw significantly after hitting 20% battery level. A high temperature is more likely when charging several devices for 100W or more total output.

If concerned about heat try to keep the power bank cool. Rest it on a non-insulating surface, such as a wooden table, and not on a bed or blanket. Keep it in range of air conditioning or a fan, blowing cool air over its surface. And always keep it out of direct sunlight. If the unit does throttle or shut down due to heat then disconnect the cables and allow everything to cool down. Such instances should be the exception more than the rule for most users. 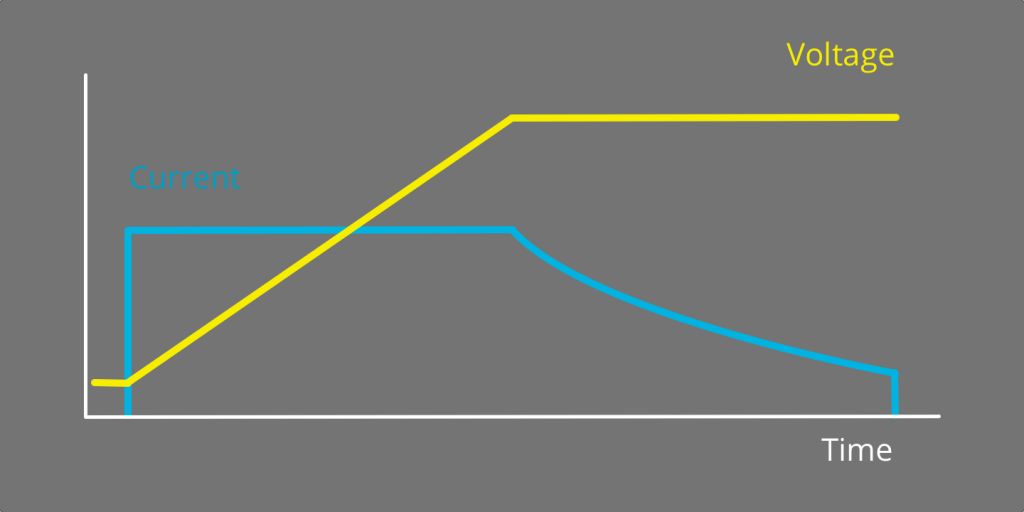 Pass-through charging is useful when you only have one USB wall charger. But it is not recommended to use this feature regularly. It puts more heat and stress on the portable charger. Which will affect its lifespan. It can also provide an inefficient charge to your device. Again, not great for its own battery’s lifespan. It is okay when traveling with limited wall outlets, but not something you should set up at home.

UPS (uninterrupted power supply) is a similar, but difficult and more uncommon feature. With regular pass-through charging power to your device can stop if power to the power bank stops. With UPS the power bank acts as backup power for your device in the event the main power fails.

During testing, I connected ZMI’s power bank to a USB-C PD wall charger. Then to a phone and monitored the phone’s power draw. When I turned off power to the wall charger there was no interrupt to power to the phone. 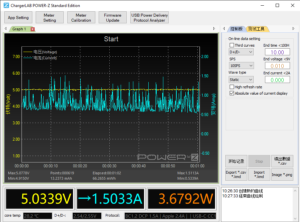 This feature doesn’t matter much for charging your phone, laptop, or other devices with their own battery. But it is useful for a new Raspberry Pi 4, which uses USB-C PD for power without an internal battery. It would also work with a USB-C-powered Wi-Fi router or security camera.

The ZMI PowerPack No 20 will likely become my new go-to power bank when traveling with a laptop, replacing the ZMI PowerPack 20K Pro. I don’t need the full 100W output (yet), but the second USB-C port and no throttling of output are big upgrades. 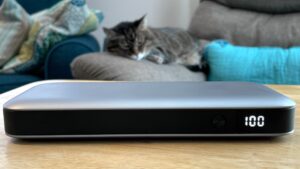 The power bank is quite large for its capacity, a consequence of supporting so much simultaneous output. It is nearly the size of many 26,800mAh models while slightly less capacity. For me, the trade-off is worthwhile, as higher total output is in short supply. And the total weight is less when you consider this can replace carrying both a small power bank for your phone and a large power bank for your laptop.

ZMI has U.S.-based support (web, email, phone) and an 18-month warranty. They were founded in the USA and were acquired by Xiaomi in 2021. They continue to operate as a standalone brand for niche charging accessories.

The ZMI PowerPack No 20 offers high capacity and high output for one, two, or even three USB PD devices at once. Its 1-100 display, pass-through, and UPS functions are all icing on the cake.