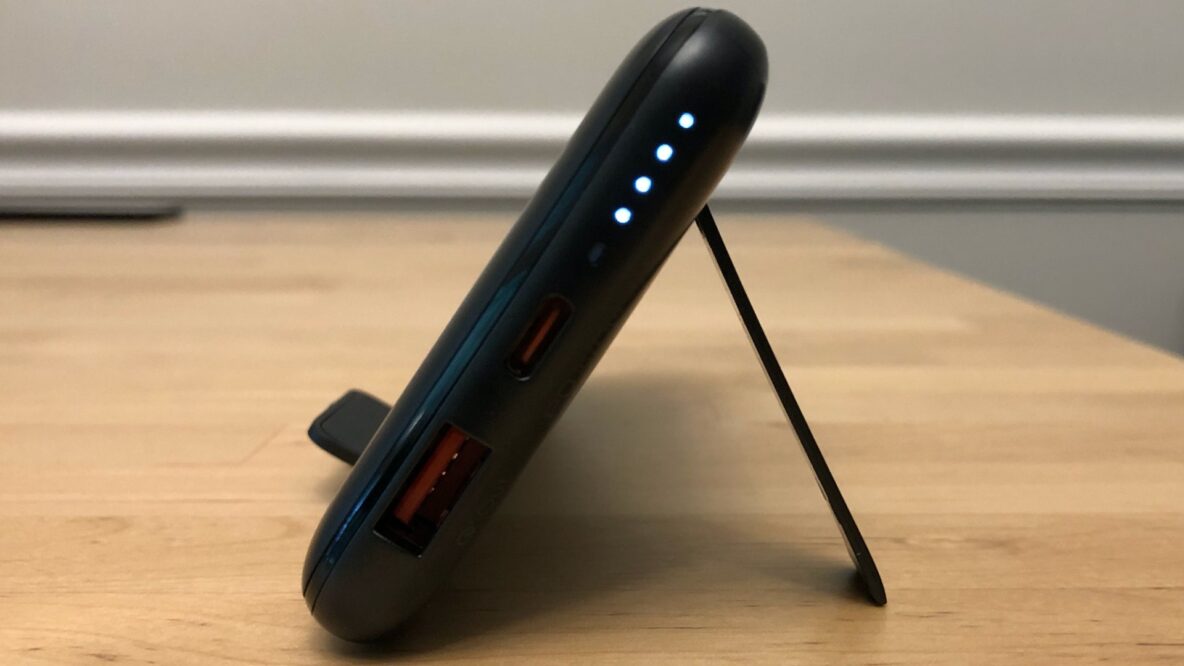 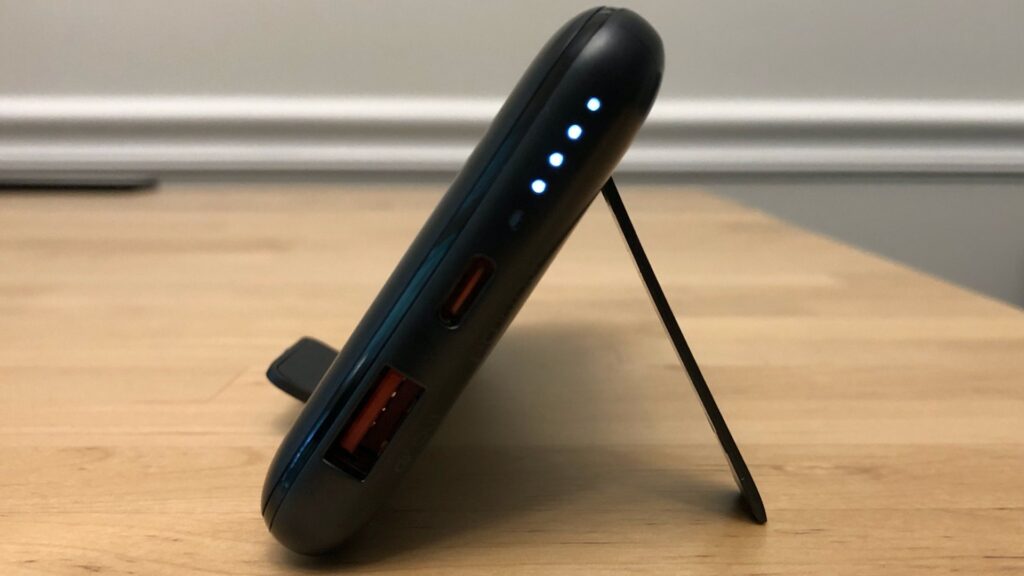 AUKEY PB-WL02 Basix Pro Wireless 10000 side with kickstand out

The AUKEY PB-WL02 Basix Pro Wireless has a built-in kickstand and foot rest. Allowing it to be a phone stand as well as a portable charger. Watch videos or play games on your phone, while charging using the wireless pad or a cable. 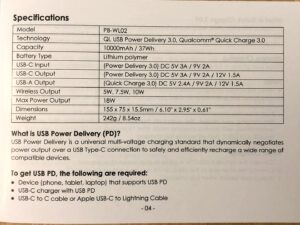 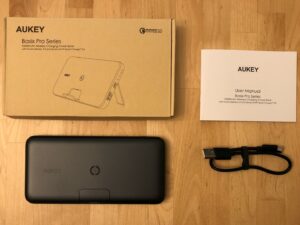 The No products found. by specs is a typical wired and wireless portable charger designed for phones and handheld devices. Supporting USB-C PD, Quick Charge, and Qi wireless standards. It’s 10,000mAh is also typical of similar models. Its stand out feature is, well, its stand. It has a built-in kickstand in the rear. And a folding down rest for the phone on its front. Together a smartphone can be placed at an angle more comfortable for viewing media. The phone rests against the Qi wireless charging pad. And you can set the phone so its charging port faces the same direction as the USB-C and USB-A ports. Either allows for charging while still using the phone in a fixed position.

The enclosure is entirely plastic. There’s no gripping surface on the Qi wireless pad. Instead a small bit of gripping material is on the bottom rest when in stand mode. The lack of gripping material across an entire side keep the portable charger clean, as it doesn’t attract and hold dust as much. The two USB ports and LED indicators are on the same size, which the power button around the corner. The wireless side is easily identified by a raised silicon ring in the center. A phone rests on that, offering a bit of grip to help keep it in place.

Using a Moto G6 for testing we see Quick Charge will fast charge over the USB-A port. The Moto G6 fails to get QC over USB-C, as that is an issue with that particular model phone. Other QC supporting Android phones would be expected to work over USB-A or USB-C.

Qi wireless compatible phones and devices can wirelessly charge with this power bank. 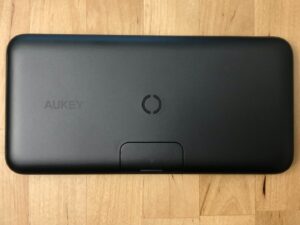 Wireless charging will work with another device plugged into a USB port. But charging two devices will slow the charging speed for both devices.

The Qi wireless charging pad supports 5W, 7.5W, and 10W power draws. This allows most phones to reach their max wireless power draw. Though it is worth nothing all are still slower than the 15-18W charging you can see with a wired connection.

The benefit of wireless charging is convenience. You don’t need to carry a cable. You can hold the phone and power bank together with a cable dangling. And is a must have feature for anyone with an Apple Watch or other device which only charges wirelessly.

No Fast Charging With Two

If you connect two devices to the power bank it will disable all fast charging tech. This goes for two wired connections. Or a wired and wireless connection together.

There is an 18W max output limit. Under this both ports only support 5V. Which removes fast charging options outside of Apple 2.4A standard.

This limitation is typical of many power banks. A few can allow for one fast charging and one regular charging. Fewer still allow for dual fast charging, and those are always large and heavy. There is a limit to how much current can cross its circuits without extra hardware. Which adds size, weight, and cost.

Whether you should fast charge one device or regular charge two depends on battery levels and your immediate needs. The closer both devices are to 100%, the less impactful not fast charging becomes. 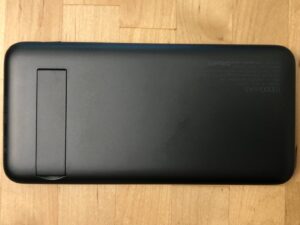 This portable charger supports pass through charging under these connections:

Pass through charging is useful when you only have one USB wall charger. But it is not recommended to use this feature on a regular basis. It puts more heat and stress on the portable charger. Which will affect its lifespan. It can also provide an inefficient charge to your device. Again, not great for its own battery’s lifespan.

The AUKEY PB-WL02 Basix Pro Wireless performance like similar models with the same specs. Its built-in phone stand function is the main draw over other options, both from AUKEY and other brands.

For phones it fast charges iPhone 8/X/XR/XS/11/SE, Samsung Galaxy, and Google Pixel. As well as LG and Motorola phones. And any other Android which supports Quick Charge.

The Qi wireless pad supports up to 10W wireless fast charging. Auto sensing and adjusting for your phone’s specs. It is an essential feature if you want to charge a wireless only device on the go, such as an Apple Watch.

The lack of gripping material on the wireless pad is a plus for me. Such surfaces tend to collect dust and hair, making them less presentable. Not to mention difficult to clean. The silicon ring offers a minuscule amount of grip, just enough to help hold the phone in position. But it can spin easier than with other options.

A Qi compatible phone can charge while laying fully across the side of the portable charger. Or at a 90° angle, provided it is flat. The stand can hold a phone in either horizontal or vertical orientation. But for most phones they will only charge while horizontal. Grips on the bottom rest, along with those on the silicon ring, hold the phone in place. When opening up the kickstand there is a loud click, indicating it is locked in position.

AUKEY has U.S. based support (web and email) and a 24 month warranty. You must have purchased the product either from them or through Amazon for support. They also have an online community for news, reviews, and support.

The AUKEY PB-WL02 Basix Pro Wireless offers the benefits of a phone stand, wireless charger, and portable charger. Weighing more than either of those, but less than all put together. But the phone must remain horizontal to charge while in the stand mode.