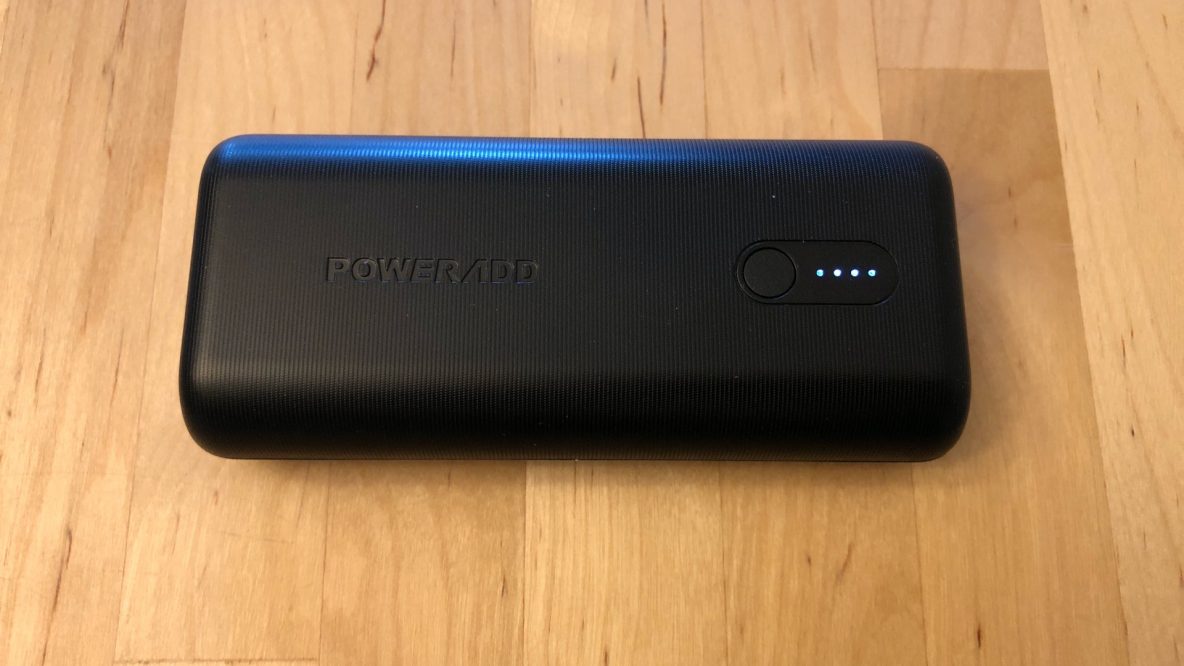 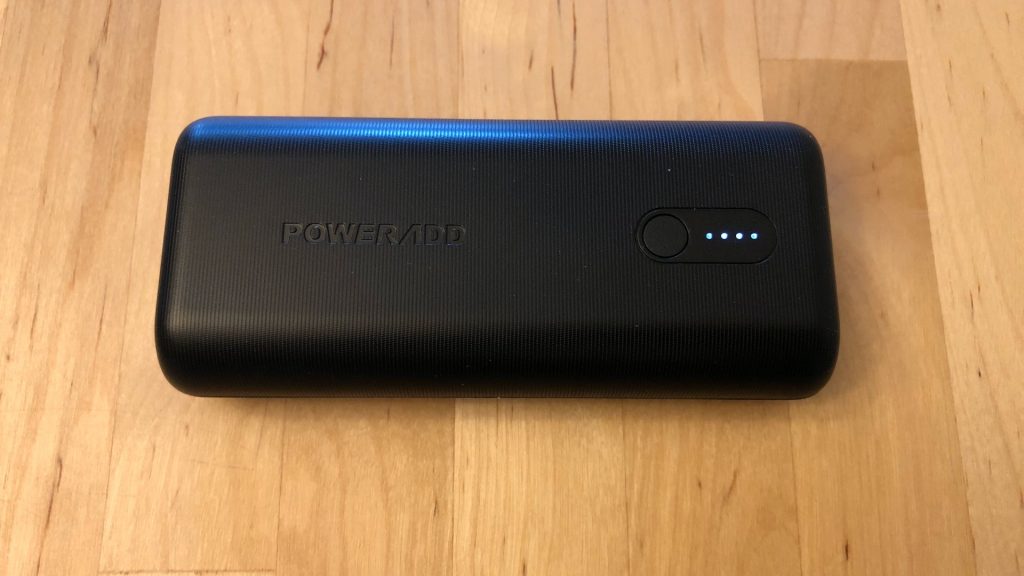 The PowerAdd Energy Cell II 10000 provides fast charging for smaller USB-C devices. At a competitive price, given it includes trickle charge and a travel pouch. But you’ll need a better cable for fast charging.

Disclosure: As an Amazon Associate I earn from qualifying purchases. PowerAdd provided the product in this review. 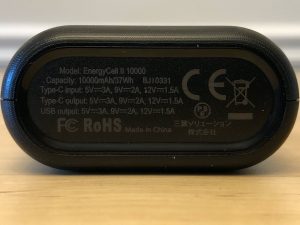 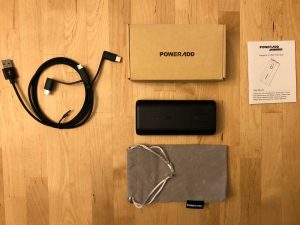 The PowerAdd Energy Cell II 10000 has your basic black power bank design. Both USB ports are on the same side. The LED indicators are right next to the power button. The power bank isn’t balanaced along its center, but rather is heavier away from the USB ports. The lithium cells are in the back. While the lighter electronics are up front. The included travel pouch has plenty of room for the power bank and a couple of cables. And closes with a draw string.

Using a Moto G6 for testing we see Quick Charge will fast charge over the USB-A port. Any QC supporting Android phone with USB-C can use the included micro-USB cable with USB-C adapter. It allows for the same throughput as a regular USB-C to USB-A cable. And supports the required 56k Ohm resistor. 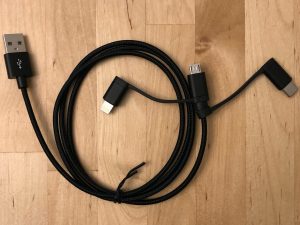 The PowerAdd Energy Cell II 10000 currently includes a micro-USB cable with two attached adapters. One for USB-C and one for Lightning. Their attachments act like LEGOS, connecting to one another and the base of the cable. If pulled loose they tend to slide up and down the length of the cable when not in use. Only one attachment can be used at a time, as they each need the micro-USB connection of the cable.

As a general rule it is safe to use such a USB-C to micro-USB adapter. That is an adapter that turns a micro-USB connection into a USB-C connection. The type we have here. My USB tester showed a 56k Ohm resistor is included. That resistor is required under USB-C specs for all USB-C to USB-A cables. The cable charged my Moto G6 at the same rate as a regular USB-C to USB-A cable.

There’s also no problems with a Lightning to micr0-USB adapter. It will not allow USB PD fast charging, as that requires a USB-C to Lightning cable. But it did charge my iPhone 8 at the same rate as a regular Lightning cable. 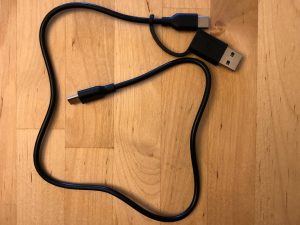 Recently PowerAdd changed the USB cable included with their power bank. I welcomed the change. As the previous cable included an adapter that went against USB-C specifications. The test unit I received include the now discontinued cable. And PowerAdd sent me the new cable when the change occurred.

If buying new today you should receive the micro-USB cable and attachments.

If you already own the power bank and received a USB-C to USB-C cable with an adapter this is for you. The cable itself is fine. But the included USB-C to USB-A adapter is potentially dangerous. And I suggest snipping its tether and throwing the adapter away.

USB Type-C receptacle to USB legacy adapters are explicitly not defined or allowed. Such adapters would allow many invalid and potentially unsafe cable connections to be constructed by users.

That is what section 2.2 of USB-C specifications states. “USB legacy” are older USB types, including Type-A.

The problem is having this adapter allows for connections which neither device can deal with. Unlike a USB-C to USB-A cable, the adapted USB-C to USB-C cable doesn’t know it is going into a USB-A port. In some cases using the adapter will work. In other cases charging or data transfers won’t work. The real danger is using such an adapter on both ends of a cable. That allows for potentially damaging connections. So please follow the guidance of the USB-C specifications. And discard the USB-C to USB-A adapter.

Trickle charge mode corrects for this, by forcing the power bank to stay on for a couple of hours. Allowing small accessories time to charge. 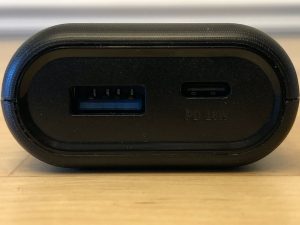 The PowerAdd Energy Cell II 10000 offers the same specs and extras as a more expensive brands. There aren’t many 18W USB-C PD with trickle charge at this price point. The included micro-USB cable and adapters will work with many devices. But it can’t support the same fast charging speeds as a USB-C to USB-C cable. The power bank also under performs in energy efficiency. So won’t last quite as long as some more expensive options.

With USB PD and Quick Charge it’ll fast charge most model iPhones and Android. Huawei phones can get fast charging on the USB-A port, though not as good as their own SuperCharge. OnePlus phones will charge at a normal rate.

For the Nintendo Switch it charges in handheld mode while you play. Due to the 12V power profile it is slower than some other USB-C PD chargers with the original model of the Switch. But still enough to charge with the most demanding games. Newer models will charge near their max rate. In my testing it provided about an hour less playtime compared to similar 10,000mAh power banks.

And trickle charge mode allows it to keep your fitness tracker and earbuds topped off.

You can charge two USB devices at once. But not with fast charging enabled. When dual charging the total output is 15W. That’s fine for two phones. But if you need to top off in a hurry stick to one device at a time.

PowerAdd offers power banks, USB chargers, and solar panels for charging various electronics. They have U.S. phone and email contacts available. And offer a 30 day return and 24 month warranty on products bought from their online store or through Amazon.

The PowerAdd Energy Cell II 10000 offers the most popular fast charging tech in a compact power bank. The included micro-USB cable with adapters will get your devices connected. But you’ll need other cables for fast charging. Trickle charge mode will keep your low power accessories up and running.